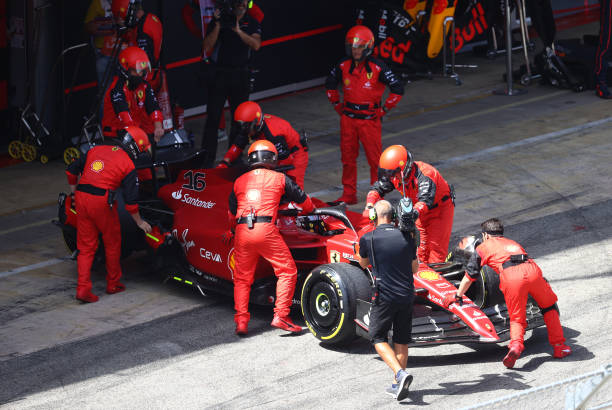 BARCELONA, SPAIN - MAY 22: Charles Leclerc of Monaco driving the (16) Ferrari F1-75 retires from the race during the F1 Grand Prix of Spain at Circuit de Barcelona-Catalunya on May 22, 2022 in Barcelona, Spain. (Photo by Dan Istitene - Formula 1/Formula 1 via Getty Images)

The Italian team lost the championship lead, and they still don't know why.

The 2022 Spanish Grand Prix saw Ferrari’s Charles Leclerc retire from the lead of the race with a mysterious engine problem.

As of now, Ferrari still either don’t know or won’t reveal the cause of the failure. However, they have revealed a little more about what went wrong and what their plan is.

Leclerc had a solid lead in the Spanish GP, until lap 27 when he suddenly lost power and had to pull into the pits and retire.

At the time, team principal Mattia Binotto commented to Sky Sports that the team had no indication of what went wrong.

“Obviously, there’s been a sudden power unit issue,” he said. “Certainly a serious reliability issue, but the power unit will be [sent] back to Maranello, [it] will travel during the night and, tomorrow morning, we’ll disassemble it.”

A devastated but calm Leclerc was confident after the race that the team had everything under control, saying “I’m pretty sure that everyone is already working flat out to understand all of it and to fix it as quickly as possible.”

Yesterday, BBC Sport’s Andrew Benson revealed a few comments from Ferrari regarding the problems with the engine. Apparently, the failure occurred within the turbo and the MGU-H, which were both extensively damaged.

“They say they are satisfied it did not occur through a design fault or reliability issue with these two components or any other elements of the PU,” Benson said on Twitter. “Ferrari say they don’t want to say any more.”

What the problem could be, if it isn’t a design flaw or a reliability issue, is unknown. Of course, if Ferrari still doesn’t know what caused it, they’ll be hesitant to reveal that. With Monaco coming up this week, there’s almost no time for a deep dive into what the problem could have been.

By Katy Roberts6 hours ago

New Engine For Leclerc in Monaco

Benson reported that the damage to the turbo and MGU-H is terminal. Whatever the cause, Leclerc will be needing his third engine of the year for this week’s race at Monaco.

As per the regulations, drivers are only allotted three engines per year. So Leclerc will likely need to take a grid penalty at some point in the season. With well over half the races still to go, it’s highly unlikely this new engine will last.

With Red Bull securing a 1-2 finish at the Spanish GP, they took the lead of both the constructor’s and the driver’s championship. Both teams have now seen reliability issues take them out of contention. Even in Barcelona, Max Verstappen struggled with a faulty DRS system.

It’s crucial for each team to figure out these reliability problems as soon as possible. After all, every point counts in the fight for the title.