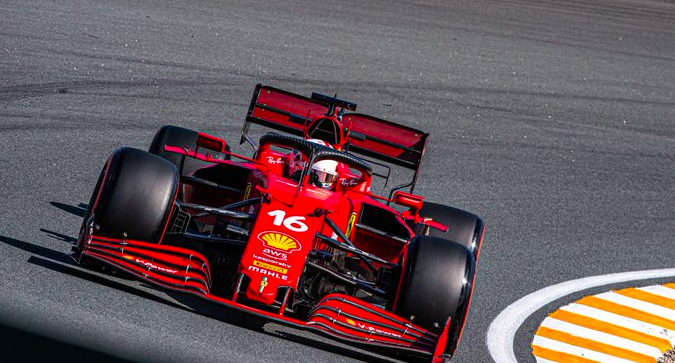 An unexpected turn of events in The Netherlands.

Ferrari dominated the track with a 1-2 finish after two red flags delayed the session in Zandvoort.

All drivers started on medium tyres for the rollercoaster ride on a track where the top speed can reach 310 km with a chance of 69% throttle and finding a balance for the downforce. The pace on the historic track ranged from 1:11 to 1:15.

There’s not one point on this circuit that is completely flat. Turns 3, 11, and 12 appeared to be a challenge. Yet Ferrari was on fire when it came to the corners and intense curves.

Esteban Ocon had a magical moment and impressed to take third. The Alpine garage had a round of applause. Ocon was the fastest with the best car performance though in the low-speed corners.

Bottas stepped up for Mercedes on mediums to finish fourth by only using his medium tyres on 32 laps.

It was a frustrating time for Max Verstappen who was trying to get clear laps in on soft compounds. It was necessary to run on a lower fuel level in hopes of a quick turnaround on the track. The electric atmosphere with a sea of orange fans helped to energise and motivate him more as he managed to finish fifth.

Fernando Alonso aimed for power on his soft tyres. The track is full of swoops and a crazy flow which had him seal sixth.

Pierre Gasly got a bit of trouble around turn 3 but got seventh. After him, Lando Norris looked great out there for McLaren. Antonio Giovinazzi surprised to nail ninth. Then we saw see Sebastian Vettel return on soft tyres getting the Aston Martin going again due to his prior engine failure in FP1 to round out the top 10.

The seven-time champion saw an unexpected result claiming 11th. The session was suspended during the early stages when Lewis lost power by turn 8. Mercedes engineers advised to turn off the engine. Nothing was on fire. Hamilton stopped on the side of the track and exited his car safely. During the red flag, marshalls retrieved his W12. The drivers returned to the pit lane until time to resume. This is the Brit’s second power unit issue.

Kimi Räikkönen raced his heart out. It’s going to be sad to say goodbye to The Iceman who saw 16th. Mick Schumacher made some decent pace and sailed into 17th. Nicholas Latifi tried to trek on and finished 18th.

The other red flag that stopped the session was at turn 11. Nikita Mazepin spun out into the gravel. The Haas team provided assistance via radio to power off the car. Last, George Russell rounded out today’s results for Williams.

After 36 years, we got our excitement back at Zandvoort. Can’t wait for FP3, Qualifying and the Race!