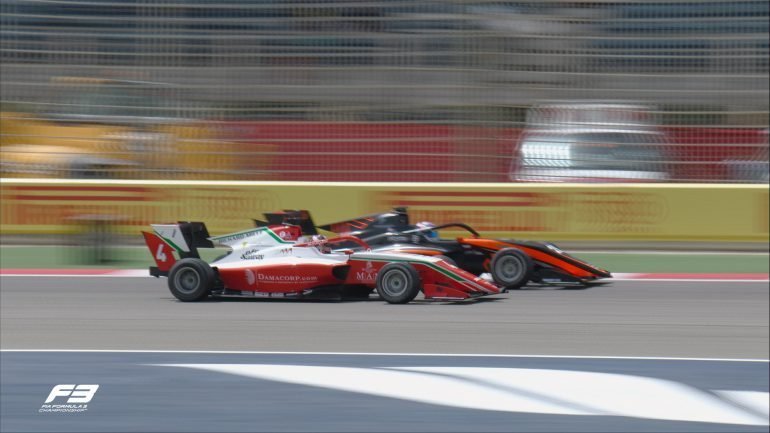 Victor Martins wins the first Formula 3 Feature Race of the season. Arthur Leclerc with a great pace started from P13 and finished P2.

As the red lights go off and the 29 drivers go full petrol, F. Colapinto closes and keeps his first position. But after curve 4th we saw a collision between some drivers, resulting in some damage and the safety car until the 5th lap.

As the race continued, the drivers continued retiring at Lap 1: Caio Collet from MP Motorsport with suspension damage, Zane Maloney and Francesco Pizzi with a collision that is still under investigation.

As well as Roman Stanek and Nazim Azman touched, the battle for 3rd position was intense and both retired from the race. Trident’s driver, Stanek got a tyre puncture. He suffered a puncture during the Sprint race yesterday as well. Today’s was due to a slight collision with Alex Smolyar.

Arthur Leclerc with a great pace, started at 13 position got through 3rd place by lap 11. At this time the most intense battle of the race was between the Monegasque, Victor Martins and the leader Franco Colapinto. As they got

At the final laps, Colapinto tries to get the second position and moves through the field but Leclerc manages to hold the position. At Lap 21 Colapinto receives a 5-second penalty for exceeding the track limits and as he crosses the line gets down to 5th place.

Hadjar, the Sprint race winner, suffered a puncture and retire as well as

The checked flag is out and Martins got the win, the first win of the season goes to the ART Grand Prix team.

As the drivers got at the pitlane, Charles Leclerc appeared to congratulate his brother for the 2nd place and the great battle.