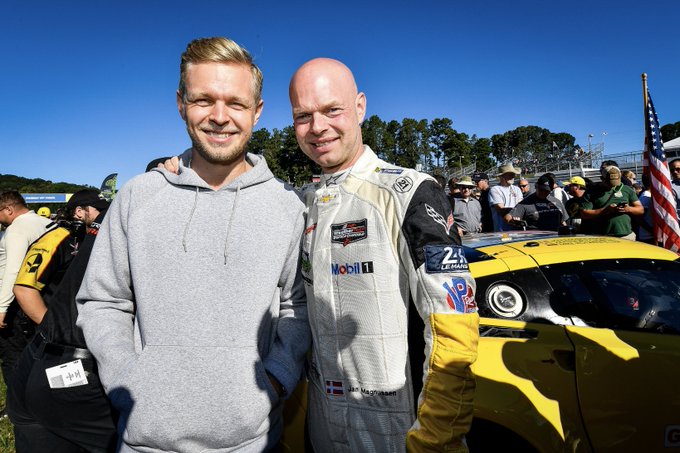 Kevin Magnussen and his father Jan have raced together in 2021 (Feature Image Credit: @janmagnussen on Twitter)

Kevin Magnussen and his father Jan will shortly race together in the Gulf 12 Hours endurance event in Abu Dhabi. After a strong comeback season in F1 for Kevin, he and Jan are hoping for a positive result.

The two generations of Magnussen will drive an MDK Motorsports-run Ferrari 488 GT3 this weekend. Taking part in the gruelling Gulf 12 hours Endurance race in Abu Dhabi, they will be facing off against fierce competition.

The family team have already raced together, pairing up to tackle the iconic 24 Hours of Le Mans race in 2021.  They raced to P29 overall and P17 in the LMP2 class. 2022 sees them returning to GT Racing, both with respectable histories in the category.

Magnussen enjoyed a competitive season, winning at Detroit and finishing the year P7 in the standings. He also had a one-off race with Arrow McLaren SP in Indycar at the Grand Prix of Road America. However, he would sadly retire due to mechanical issues.

Signing for Peugeot Sport for the 2022 season to race in the World Endurance Championship (WEC), Magnussen looked set for a sportscar career. However, Haas called him on the eve of the 2022 season, releasing him from his contract.

As reported by Motorsport Magazine, Father Jan is no stranger to F1 or sportscars. Jan was  Test Driver for McLaren in 1995, debuting at the Pacific Grand Prix.  He then moved to Stewart Grand Prix in 1997 before departing the team midway through the 1998 season.

Jan moved to sportscars where he has been very successful. His accolades include winning the American Le Mans Series GT1 Championship and the Danish Touring Car Championship in 2008. More recently he won the IMSA Championship for GTLM class in 2018.

Speaking to formula1.com, Kevin and Jan are both relishing the prospect and challenge of sharing their first experience in a GT car together. Kevin said racing with dad Jan was “something that I enjoy a lot”, recognising how unique the situation is for a father and son to race together. He also hopes to beat his dad in equal machinery but admits Jan is “going to be pretty hard to beat”:

“We’re going to get a few laps in the car before going to Abu Dhabi with it. But, of course, it’s something that I’m really excited about.

“Racing with my dad is always something that I enjoy a lot. It’s such a special thing that we’re still both active racing drivers at the same time. He’s not that old, so I feel like I have to grab the opportunity, as much as I can, while he’s still in good shape and fast.

“It’s the first time that we’re going to drive in a GT car together and I think he’s going to be pretty hard to beat in that one, but we’ll see!”

Another family affair in sportscar racing could also be possible in the future. Current World Champion Max Verstappen’s dad Jos is also a former F1 driver, and a sportscar racer. Verstappen has confirmed, however, he won’t be doing a similar venture with father.

Open to the possibility himself, Max has said the idea to race together remains with Jos: “I want to, but he doesn’t want to at the moment, so I need to convince him! He’s fully into rallying. I hope, of course, in the coming years, we can do that.”