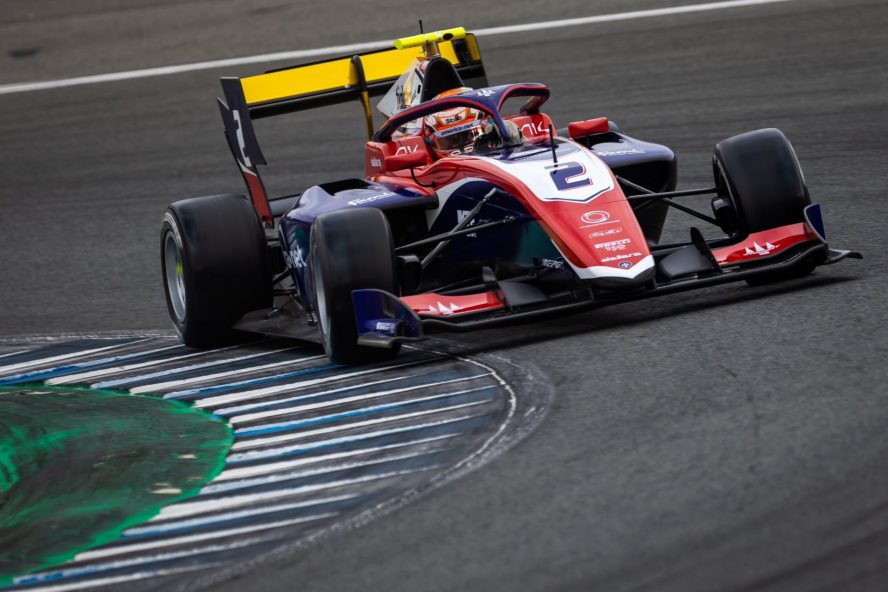 Formula 3 outfit Trident MotorSport has revealed that Gabriel Bortoleto will drive for the team in next season’s championship.

Trident’s announcement makes it the first on the grid to unveil one of its drivers for the 2023 campaign, and follows an impressive stint by the 17-year-old Brazilian at last week’s F3 test in Jerez, Spain.

On day two of F3’s post-season test, Bortoleto set the quickest lap of the event, with a rapid time of 1:29.554, some 0.373 seconds clear of the next fastest driver that day.

While the youngster could only manage third and fifteenth in the morning and afternoon sessions of F3 post-season testing day three, he still spoke positively of his time in the car.

“It was my second day in this car, basically, and I’m very confident and happy because I’m feeling very good with the car,” Bortoleto told FormulaNerds during the test.

“It’s a lot more downforce and power [than in FRECA] as well, so I think we’re doing a good job and also improving every session that I go on track.”

With Trident having been impressed enough to sign him, Bortoleto later added: “I am extremely delighted for the chance to compete in the 2023 FIA Formula 3 Championship with a high-level team like Trident Motorsport.

“I would like to thank every member of the team for the warm welcome I have been given. I feel ready for a new chapter in my career and to move to a higher series in single-seaters. I will put my best effort to make the most of this great opportunity.”

Bortoleto has managed to make a serious impression in his second season racing in the Formula Regional European Championship by Alpine (FRECA) series.

Heading into the penultimate round of the championship, the Brazilian sits in sixth place having picked up his first win at Spa Francorchamps in Belgium earlier this year.

In 2021, Bortoleto raced as a rookie for Fernando Alonso’s MP Motorsport-run FA Racing team, coming home in 15th place. Perhaps unsurprisingly, given the youngster’s experience racing for the Spaniard, this month he also joined Alonso’s A14 Management firm.

A14 Management looks after the interests of Clement Novalak, who raced in Formula 2 for MP Motorsport last year, as well as other budding F3 drivers like Josep Maria Marti. As such, Bortoleto appears to be in good company under Alonso’s wing.

Prior to racing in FRECA, Bortoleto competed in Formula 4 with Prema and starred in the OK-Junior karting European and World championships, a background that means he comes into F3 with a strong reputation.

“We are proud to welcome a promising driver like Gabriel Bortoleto to our line-up,” explained Trident Team Manager, Giacomo Ricci. “He needs no introduction as he has been extremely competitive since his karting days and is now collecting impressive results in the FRECA championship as well.

“We are sure that by joining the Trident Motorsport family, Gabriel will receive solid support from every team member and prove his value and qualities.”

Who else impressed in Jerez?

While an impressive performance in Jerez is by no means a guarantee of earning a seat, the F3 post-season test is an ideal proving ground for young drivers to demonstrate they’re worthy of a place on the series’ thirty-driver grid.

Marti, who returned to test the Campos car after racing for the team last season, did his hopes of staying no harm at all by finishing second to Bortoleto on day two, and topping the timesheet with a 1:31.324 that afternoon.

Though also returning after a year with Campos, Oliver Goethe drove for Trident instead at the pre-season event, finishing a creditable second place on the morning of day three.

The former set the fastest time of the pair with a 1:30.262 on day two, enough to see him finish eleventh that session, with the latter only managing a 1:32.659 on day one, albeit with two days less testing under his belt.