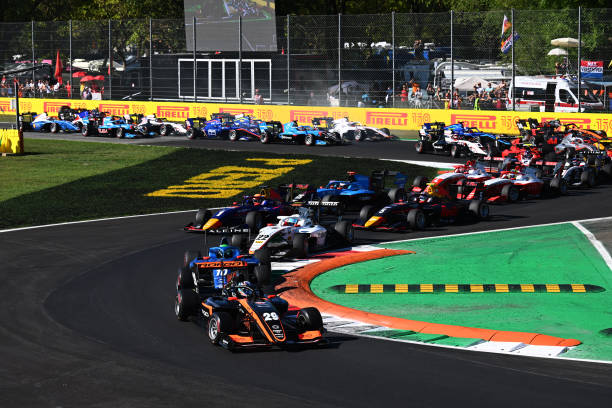 MONZA, ITALY - SEPTEMBER 10: Franco Colapinto of Argentina and Van Amersfoort Racing (29) leads the field at the start during the Round 9:Monza Sprint race of the Formula 3 Championship at Autodromo Nazionale Monza on September 10, 2022 in Monza, Italy. (Photo by Clive Mason/Getty Images)

Polesitter Franco Colapinto had a good enough start to stay ahead of the rest of the pack. He was followed closely by Caio Collet and Pepe Marti.

The title fight drama started immediately as championship leader Victor Martins went into the gravel on the first lap. He managed to make it out but dropped way down the field.

The second-placed driver overall Isack Hadjar also had a first lap incident, getting close to contact with Arthur Leclerc before diving down the escape road and losing a couple of places.

Further down the field, Roman Stanek and Kaylen Frederick fought for tenth place, with Frederick winning that battle. He got ahead and overtook Gregoire Saucy for ninth place a lap later.

Alexander Smolyar was the second driver to go into the gravel, but also managed to keep his car going and get back in the race. Not so lucky was Carlin’s Zak O’Sullivan, who hit the wall after locking up into Turn 1 and caused a Safety Car.

The Safety Car ended after Lap 8, and Colapinto waited as long as possible to start racing again. He successfully retained the lead at the restart, but it was more chaotic further down the grid. Marti dropped a place to fourth as Jonny Edgar took third.

Hadjar, who had been running outside of the points, had to box for a broken front wing, as did Smolyar.

On Lap 11 Oliver Bearman had caught up with Marti, and took fourth place. Marti took the position back a few corners later, but dipped a wheel into the gravel and dropped all the way to seventh place.

There was no rest for Bearman, who had his Prema teammate Jak Crawford to deal with. Crawford passed him briefly, but again Bearman came out on top and regained fourth place.

The day went from bad to worse for Marti, who was overtaken by Saucy for seventh.

Then, on Lap 15, Bearman made a bold overtake and went from fourth to second in the first two corners. He overtook both Edgar and Collet and started to make up time to Colapinto.

Leclerc fought with Kush Maini for ninth place, and took it on the final laps as well before securing eighth from Marti.

The fight for the win went down to the final corner, with Bearman just inches away from Colapinto. But it was the Van Amersfoort driver who took victory over the Prema driver, with Collet completing the podium.

Zane Maloney took fourth ahead of Edgar, Saucy, Crawford, Leclerc, and Marti. Victor Martins, despite a rough start, made his way up to take tenth place and the final point.

Martins still holds the championship lead ahead of Hadjar, with Bearman now up to third. Maloney, Stanek, and Leclerc are also still in contention for the title. It all will come down to tomorrow’s Feature Race.