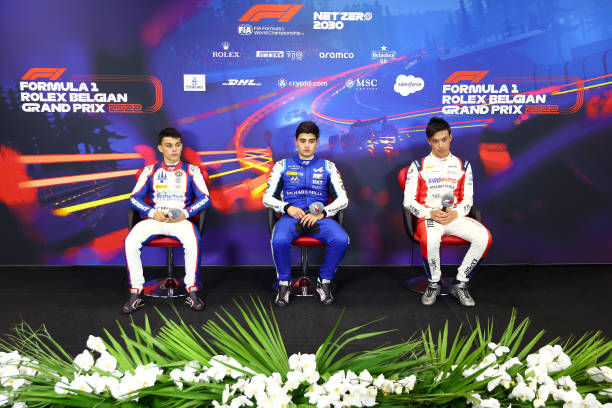 F3 returned to kick off their final three races in Spa and the top three qualifiers spoke to FormulaNerds after qualifying.

Today’s qualifying saw mixed conditions. The session started off as wet but, eventually, the drivers could put on the slick tyres. After a red flag was brought out for PREMA’s Jak Crawford, the drivers all returned to the pits. Whilst it was fairly early on in the session, some drivers braved putting slicks on, including our top three.

The slicks weren’t as problematic as one might have predicted. At the end of the sessions, times were racking up with the order on the time sheets constantly changing as faster times were set. Collet completed a pole lap of 2:11.289 but the conditions in which he achieved that were rather “tricky”.

Caio Collet achieved his first pole position this season in Spa, making it his best result since Silverstone where he qualified fourth. FormulaNerds asked Collet how the different weather conditions affect a driver’s preparation and mindset ahead of a race.

The Brazilian driver said that for him, he was “quite happy” with the wet weather. He noted that “it’s the same conditions for everyone” as Formula 3 has “30 cars on the track at the same time.”

In these wet conditions, Collet said that:

“You need to deliver your best at every single moment. But I was glad the session turned out to be wet.”

Zane Maloney told FormulaNerds that “as a driver”, seeing rain does “bring you back a bit.” However, for the Barbadian today’s weather wasn’t too much struggle.

He commented on the impact on him and the team as a whole, saying:

“We’ve been quick in all the conditions this year, so to be honest I didn’t mind if it was wet or dry or half-wet half-dry. Of course, it’s very difficult as obviously the team have to change the set up for the car, they have to get everything correct, so it’s difficult for them.

“For us as drivers, it’s just about going out there and getting the most out of the car in any condition. That was my job.”

Qualifying was especially special for Pizzi because his highest qualifying this season was 19th. He had never qualified higher than that until Spa.

The Charouz driver commented on this when speaking to FormulaNerds. He said that in “normal conditions we’re a bit further back”, so he actually hopes for more mixed/wet conditions.

“I discussed with the engineer, and when we went to slicks the car was just amazing. I could get it all together but for the race at the end we have to adapt really late because it depends on what happens really…we cannot prepare early, especially with this weather, you never know what it’s gonna be.”

Currently in the championship standings, Collet is in eighth on 52 points. Maloney is only two places behind on 48 points whilst Pizzi is 24th on only one point.

Tomorrow for the Sprint Race in Spa, they will start in the midfield due to the reverse grid. It will be a process of seeing what they can do and learning more for Sunday.