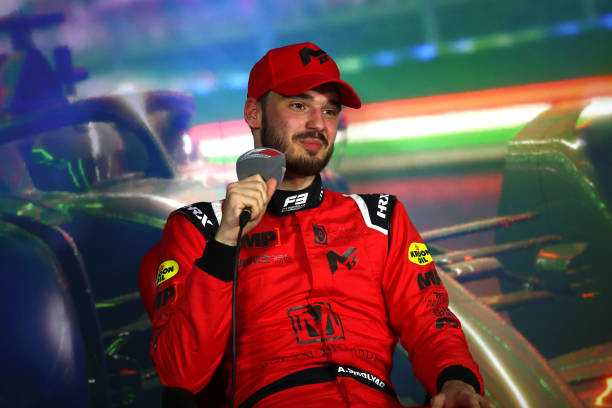 BUDAPEST, HUNGARY - JULY 29: Pole position qualifier Alexander Smolyar of MP Motorsport (11) talks in the press conference afterqualifying ahead of Round 6:Budapest of the Formula 3 Championship at Hungaroring on July 29, 2022 in Budapest, Hungary. (Photo by Joe Portlock - Formula 1/Formula Motorsport Limited via Getty Images)

F3 Smolyar: “Really need to put everything on the table”

Formula One is joined by the feeder series, Formula 2 and Formula 3, this weekend in Budapest. The latter junior series completed their Qualifying session earlier today, which saw some track limit infringements and a red flag.

Maloney, who is a Trident rookie this season, scored his maiden pole in Imola and qualified P3 at Silverstone. Whilst a top three result has been replicated, it is only Smolyar who saw his best qualifying result this season.

The pole-sitter this weekend spoke to FormulaNerds in the press conference after the session. He reflected on his qualifying session and his hopes for the races this weekend.

The Qualifying session saw a red flag halt the clock with just under five minutes left. After Zak O’Sullivan’s car was cleared from the track, drivers went back out onto the circuit to see if they could go any faster.

At that time, Smolyar had provisional pole and he managed to maintain his position at the top of the timesheets. He spoke to FormulaNerds and said that on this track, you “really need to put everything on the table” to get the best results.

Continuing, he said that it is “very hard to do the ideal lap” around the Hungaroring, and even though he has pole, the “lap was still not ideal.” When going into detail about this, he mentioned that the “tyres were overheating” and so the team had to make “compromises.”

In tomorrow’s Sprint Race, there will be a reverse grid. For Smolyar, he’ll be starting 12th and so will need to make up four places to get into the points.

He told FormulaNerds that this track is “amazing” but it is nearly “impossible to overtake”. As a result “quali is very, very important” to make sure each driver can have their maximum performance.

Looking ahead to the races tomorrow and Sunday, Smolyar said:

“I just need to score points, it’s very hard to overtake here so probably some people will just you know give it all on the first two corners. So maybe I will need to avoid these people, or maybe I need to be one of them. I cannot decide, but for sure what I need is points this weekend.”

So far this season, Smolyar has scored 36 points in total, which puts him ninth in the Driver Standings. Tomorrow he will have a challenge ahead as the Hungaroring is a difficult circuit to overtake at.

Listen to the interview here ⬇️

Some great answers from Jess here - and we agree with her motorsport time machine answer! #F1 #podcast

FormulaNerds.com — Latest News — Kevin Magnussen and his father Jan will shortly race together in the Gulf 12 ...