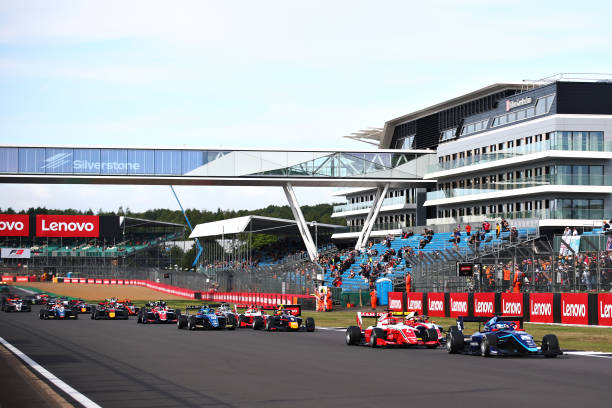 It was a tense race throughout

In an extremely tight battle for victory, it was Arthur Leclerc who took Prema’s first F3 win of the season.

It looked like the F3 race got off to a clean start: O’Sullivan maintained his lead, Arthur Leclerc slotted in nicely behind, and no one crashed.

That quickly changed when a four-way battle emerged between Zane Maloney in third, Caio Collet and the two other Prema drivers. The fight between Maloney and Bearman resulted in contact following a questionable move, with the yellow flag waved.

Looking back to the F3 frontrunners, Leclerc had caught up to the race leader. Just as he made an overtake for first position, the safety car came out. This caused many to query whether he made the move too late, which was confirmed when he gave the place back to O’Sullivan.

The pressure started to get to some, as Kush Maini went wide. For Collet, however, his avoidance of incidents handed him third place on track. He was closely pursued by Prema driver Oliver Bearman and Jak Crawford.

It was a more positive race for Prema’s F3 team compared to their previous weekends. As a notoriously successful team, it almost seems wrong that they have not won a single race this season. That looked to change as Leclerc was within three-tenths of O’Sullivan. Executing a beautiful overtake around the outside, he eventually passed the polesitter. Whilst the Carlin driver tried to retake the lead, it was Leclerc who stayed ahead.

Looking at the top ten

Close battles characterised the top ten F3 drivers on track. Collet, Crawford and Bearman were embroiled in a fight for third place. Fortunes quickly changed for Crawford as his fellow Red Bull junior driver Isack Hadjar rapidly caught up. As yesterday’s F3 sprint race winner tried to make a move for fifth, minor contact between the two sent Crawford wide and dropped him to eighth.

With him out of the fight for now, mere tenths of a second separated O’Sullivan, Collet and Bearman. There was a chance of another safety car when several drivers drove off track to avoid an incident, but they all managed to get back on track.

Unfortunately for championship contender Roman Stanek, damage forced him to retire from the race.

However, he was not the only driver whose race went downhill. Rafael Villagomez ended up in the barriers at Copse corner, bringing out another safety car.

As the safety car bunched everyone up, the top ten were: Leclerc, O’Sullivan, Collet, Bearman, Hadjar, Edgar, Crawford, Frederick, Martins and Vidales.

The F3 drivers completed several laps behind the safety car as the damage to the barriers at Copse was assessed.

On lap 15, the safety car period finally came to an end. Leclerc elected for an early restart, allowing him to scamper away from second-placed O-Sullivan.

We hadn’t seen much from championship leader Victor Martins this race, but he executed an aggressive pass on Kaylen Frederick. After starting in 11th, he now found himself up in eighth place. Next up was Crawford, who barely avoided contact with Martins. Their battle preceded David Vidales, Reece Ushijima, Frederick and Maloney fighting aggressively for tenth.

The entire F3 field remained close together as no one was more than a second behind the man in front of them.

Leclerc set the fastest lap of the race, but he was far from dropping O’Sullivan. Many expected the Carlin rookie to fall down the order, but he remained in contention for the win.

The five-way battle for the win

On lap 19 of 22, there were arguably five drivers who could all compete for victory: Leclerc, O’Sullivan, Collet, Bearman and Hadjar.

Although the interval between each was down to around four-tenths, there were few actual overtaking attempts.

With just two laps to go, O’Sullivan was the closest he had been to Leclerc all race. However, it was Bearman who made the first significant move. In a brilliant move aided by DRS, he finally passed Collet for the final podium position.

He was not done yet, though, as he pursued O’Sullivan. It looked like he was too far back, but a last-minute battle between the two Brits got extremely close. Bearman was so near to overtaking on the Hamilton straight just before the finish line, but had to settle for third place.