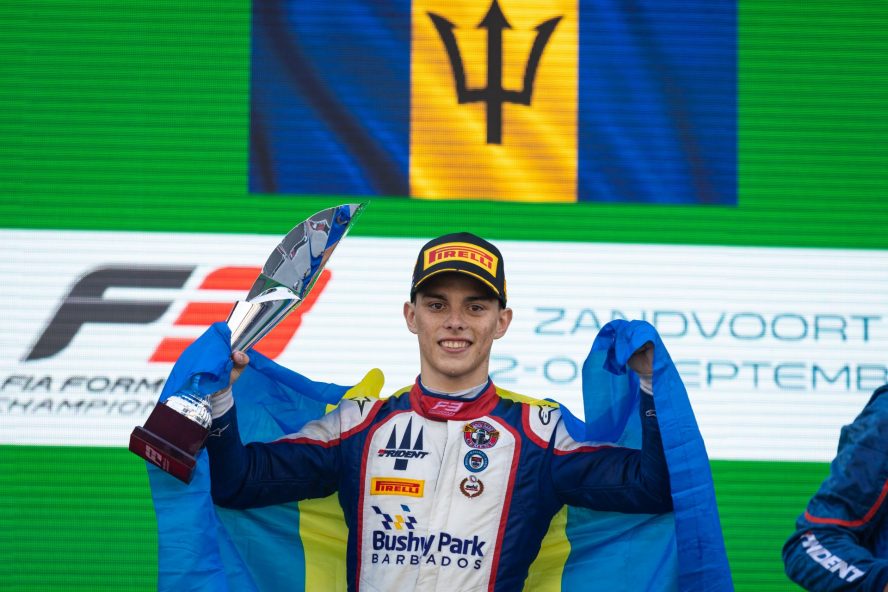 Trident’s Bajan driver, Zane Maloney, will step up to F2 early in Abu Dhabi after finishing runner-up in F3 this season

Zane Maloney, who finished second in F3, will get his first taste of F2 with Trident at the season-ending round in Abu Dhabi.

The ‘Boy from Barbados’, as he’s affectionately known, was already expected to graduate to F2 in 2023. That move was anticipated after he narrowly missed out on the F3 title in his debut campaign.

That run of form – despite a scary crash at Spa – brought him right into the Drivers’ Championship fight. Ultimately, he fell just short of ART’s Victor Martins, who clinched the title in the pit lane during high drama at Monza.

Those performances, with that of teammates Roman Staněk and Jonny Edgar, almost carried Trident to back-to-back F3 Teams’ Championships. However, fellow Italians PREMA narrowly beat them to the crown.

It’s not yet known whether Maloney will stay with Trident for his maiden F2 campaign in 2023. The 19-year-old has been linked with a move back to Carlin, who are losing Logan Sargeant to F1 and Williams. Previously, Maloney drove for them in British F4 and EuroFormula Open. Liam Lawson, in Carlin’s other F2 seat, is also rumoured to be concluding his feeder series career.

Maloney will replace Calan Williams, partnering with the experienced Richard Verschoor. Williams had already confirmed he would not be racing in Abu Dhabi. Verschoor took Trident to their first win of the modern F2 era at the season-opening sprint race in Bahrain.

“We are very proud to be able to compete with Zane Maloney in the final event in the FIA Formula 2 Championship. Zane, the Barbadian driver, terminated the Formula 3 Championship with three consecutive feature race victories and has proven to be second to no one in terms of competitiveness, almost winning the driver’s title.

Ricciardo on Red Bull: “It is like going home”

“We are therefore pleased to have Zane on board, once again this year, and we are confident that Trident will be able to provide him with the maximum support and dedication for the challenging Yas Marina Circuit.”

Maloney added that the opportunity would provide a good foundation for him to start learning ahead of the 2023 season:

Former Trident F3 drivers Clément Novalak and Roman Staněk have been linked to the team’s F2 seats for 2023. However, nothing has yet been confirmed. It has also not yet been announced who will be testing for Trident in the F2 post-season test.

Meanwhile, Novalak will be aiming to help MP Motorsport to the F2 Teams’ Championship in Abu Dhabi. The team are currently level on points with ART Grand Prix in first.