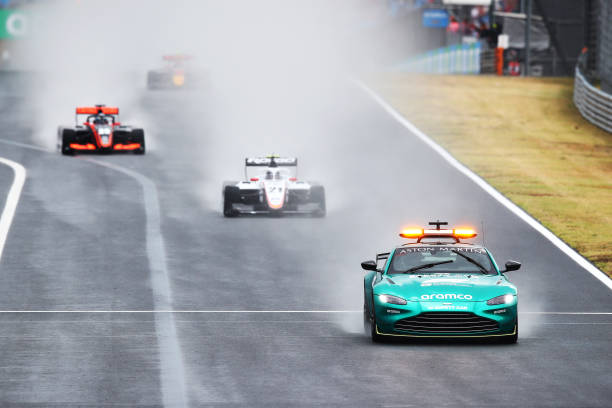 BUDAPEST, HUNGARY - JULY 30: The FIA Safety Car leads the field during the Round 6:Budapest Sprint race of the Formula 3 Championship at Hungaroring on July 30, 2022 in Budapest, Hungary. (Photo by Joe Portlock - Formula 1/Formula Motorsport Limited via Getty Images)

Benavides sees himself handed a five-place grid drop for tomorrow’s Feature Race. The penalty comes after an incident with Ido Cohen on lap five of the Sprint Race.

After a trip to the stewards, they concluded that Benavides was “wholly responsible” for the incident. They determined that “Car 27 [Benavides] tried to overtake Car 15 [Oliver Goethe] at turn one.” Adding “Car 27 [Benavides] misjudged the braking and caused a collision with Car 23. [Ido Cohen]”

The Carlin driver took to Instagram to share his feelings commenting, “Sorry to Carlin and my sponsors for damaging the car.” He went on to add “Nothing though can ever discourage me from being better tomorrow”

He also faces the same punishment as Benevides, receiving an extra two penalty points on his licence. This takes his season total to four.

Consequently, Leclerc drops down the grid to start P9 directly behind championship leader Victor Martins. As a result, Leclerc will be looking to fight through the field.

“I was just trying to put pressure and fave a move, I brake on the wet part of the track that wasn’t visible from my point of view and the onboard, locked straight away, couldn’t stop the car in time and crashed into Jak.”

He went on to say “This can not happen.” adding that it was a “silly mistake.”

The top ten line up as follows:

By Morgan Holiday17 hours ago