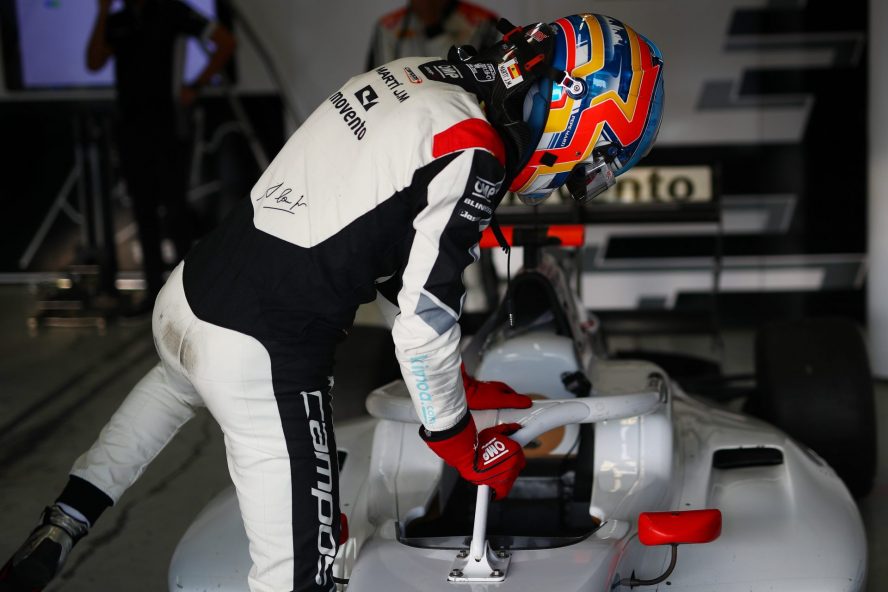 Lap times fell during the second day of F3 post-season testing at Circuito de Jerez, as the usual suspects started to stake their claim at the top of the order.

Ahead of the third session of the three-day event, a number of line-up changes saw fresh faces, and also Roberto Faria trial his second F3 car of the week.

Moving from the no. 31 VAR machine, the Brazilian driver took over from Gregoire Saucy at ART. Peruvian Matias Zagazeta got his hands on the Charouz ran by Emerson Fittipaldi (Jnr) on the first day.

Francesco Pizzi – who drove the no. 16 Charouz during the 2022 F3 season – was replaced by Hugh Barter, who currently races in French F4 for day two. Frenchman Hadrian David, who sits fourth in FRECA at the moment stepped into the Carlin occupied by Hunter Yeany yesterday.

Van Amersfoort Racing (VAR) saw two changes to their line-up. With Faria moving over to ART, Lorenzo Fluxa of Spain took his seat, and Noel Leon made way for American driver Max Esterson of GB3.

With race simulation runs the preference for Wednesday’s afternoon session, day two would provide new opportunity for the field to stretch their legs and head south of the one-and-a-half-minute mark.

The majority of the drivers made their way out on circuit at the start of green flag running on the second morning. At peak, 29 of the 30 shared the track in the opening minutes, with just VAR’s Esterson taking a little while longer to make his way from the garage.

As the session approached the hour mark, Trident’s Gabriel Bortoleto and Pepe Martí of Campos took the field into the 1:29s, before a brief red flag stoppage was caused by Taylor Barnard in the no. 24 Jenzer car for an incident at turn 10.

As the field continued to rack up the lap count, the order at the top of the timing board remained fairly stagnant. The only change of note coming from Bortoleto, who increased his gap to Martī from +0.056 to +0.373, with a 1:29.554 – the fastest time in testing so far.

Faria brought out the second red flag of the day in the second hour of the morning running, leading to a period of relative quiet around Circuito de Jerez.

Though track action ramped up again towards the session’s end, the timing board remained stable. The top 12 – critical for qualifying in F3 – being occupied by all three drivers from both Trident and PREMA. The two outfits have placed first and second in the F3 Teams’ Championship over the past three seasons.

They were joined by the Hitechs of Montoya and Mini, and Taylor Barnard, who despite causing the first red flag of the day took his Jenzer to a noteworthy P10.

Kaylen Frederick continued his impressive run to slot in P4 and Franco Colapinto ran well for MP Motorsport to P9.

With the afternoon sun came the afternoon long runs at F3 post-season testing. Christian Mansell quickly found the top of the leaderboard and stayed there through the first half hour. A brief stoppage in running around then came courtesy of Taylor Barnard for his second red flag of the day.

As most of the field worked their way towards 20 laps completed, Hugh Barter usurped Mansell at the top of the timing sheets with a 1:32.226, nearing three tenths up on his compatriot.

Approaching the hour mark, the three Hitechs emerged from their garage, accompanied by the Campos of Pepe Martí – the only four runners not to have set a time in the first 50 minutes of the session.

It didn’t take Martí long to stamp his authority on the session, lowering the leading time to 1:32.025 on his third lap out the pits.

The Hitech trio took a little longer to bring themselves up to speed, with Mini, Montoya and Ushijima slotting in P19, P26 and P27 respectively – though not representative of their pace amidst a different programme to the rest of the pack.

Just prior to the conclusion of the first hour, Christian Mansell bettered his test teammate Martí to bring the lap times into the 1:31s.

Little more than 10 minutes later, Gabriele Mini brought out another red flag at the ever-elusive turn 10, which the drivers have found particularly tricky over the first two days of testing.

After a period of relative quiet, PREMA decided to get in and amongst the action at the sharp end, with their trip dropping below the mid-1:32s. Around the same time, Pepe Martí jumped ahead of Mansell with a 1:31.807. Paul Aron’s PREMA in P3, also south of the 1:32s.

Heading towards the final 40 minutes of running for the day, Gabriel Bortoleto – clearly not satisfied with his P1 from the morning session – pipped Pepe Martí by three-thousandths of a second to sit P1. The Trident driver then extended that lead to 60 thousandths of a second the next time around. All before promptly bringing out the third red flag of the afternoon.

Into the last 30 minutes of the day and the usual suspects began to get in and amongst the top 10. Leonardo Fornaroli split the Campos pair of Martí and Mansell to go P3, with the other Trident of Oliver Goethe in P8. Having not improved on their earlier times, the three PREMAs stayed in the garage as they dropped slightly to P6, P7 and P9.

The other Campos of Hugh Barter rounded out the top 10 for a while, whilst Gabriele Mini set the fastest lap time of the session with a 1:31.736.

Having lost time through his earlier incident, Taylor Barnard put his Jenzer into P15 but clearly found the limit soon after as he triggered another stoppage with around 20 minutes to go.

When running resumed, Zak O’Sullivan in the ‘Red Bull (not Red Bull)’ PREMA lowered the gauntlet further still by 0.255 and a mid-1:31. However, Mini fought back by shaving almost three tenths off his best time of the afternoon.

By this point, Reece Ushijima and Kaylen Frederick were in the mix, but it was the two PREMA rookies of Aron and Beganovic who jumped ahead of their more experienced teammate.

Having flirted with the top spot for most of the afternoon, Martí reclaimed the P1 with six minutes to go. This time, he managed to hold on  – aided somewhat by a final red flag from MP’s Mari Boya.