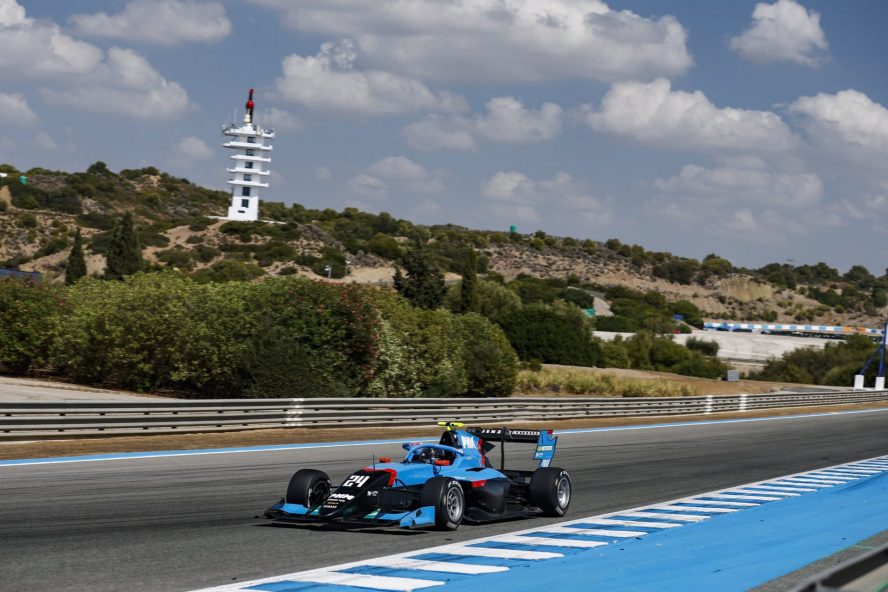 Jenzer's Taylor Barnard impressed on the final day of F3 post-season testing, which saw some less familiar names in the top 10 during a quiet afternoon session

Little changed between days two and three of F3 post-season testing in Jerez as perfect conditions prevailed. However, the final day proved to be a tale of two halves.

There were, however, two small line-up changes to the proceedings. Brad Benavides – of Carlin during the 2022 F3 season – took over the title-winning ART car from fellow American Kaylen Frederick. With Christian Mansell returning to EuroFormula for the weekend, Francesco Pizzi returned to the fold in the no. 20 Campos car.

The morning saw most of the field separated by less than a second, as short runs took precedence. Like most of the week, much of the top of the order was dominated by the usual teams and drivers, with a few surprises found inside.

Aside from the standard long runs appearing as normal later in the day, the first red flag-free session of the week came in the final afternoon of testing, over a period that saw many less familiar names rise to the fore.

Fastest driver of the week

The fastest man on track on Thursday’s running was Gabriel Bortoleto. In and amongst it on the final morning, his 1:29.544 from the previous day would not be topped for the rest of the test. Despite causing a red flag on the middle afternoon, the young Brazilian was not deterred. He spoke with FormulaNerds about topping the timing boards before the final day of F3 testing commenced:

“It was my second day in this car, basically, and I’m very confident and happy because I’m feeling very good with the car – it’s quite a bit different from the FRECA [car] that I’m used to,” he said.

“It’s a lot more downforce and power as well, so I think we’re doing a good job, and also improving every session that I go on track – I’m improving or doing something better than I did in the previous one [session].

“So yeah, the morning session was very good. I did a couple of laps that were very, very quick. The car was looking amazing. And I’m still working on myself to get better.”

On his red flag incident, the driver running Roman Stanek’s no. 2 car from the 2022 season explained even though it wasn’t a big one, it wasn’t worth heading back out on track after:

“We were doing fresh tyres and I made a little mistake on my in-lap, and I hit the wall [at turn 10]. I Just broke the front wing, but at the end we decided not to go for new tyres at the end of the day.”

Already looking ahead to the final day, Bortoleto said that he couldn’t wait to drive the F3 car again and to continue improving.

The final day of running saw Oliver Goethe and Sebastian Montoya top the timing boards in the opening 10 minutes – Montoya with a 1:30.759.

An early red flag – brought out by Hadrien David in the Carlin – temporarily halted proceedings. However, it was just a brief trip across the gravel with no damage to the car.

When green flag conditions resumed, Bortoleto quickly made his mark, bringing the quickest time down into the 1:29s.

Half an hour into the session, VAR’s Max Esterson caused the second red flag of the day. After a few minutes, the cars were back out on track, aiming to better Bortoleto’s time.

As more drivers joined him in the high 1:29s, the Trident driver was shuffled down to P3. Franco Colapinto offered a new reference lap for the day, though still shy of Bortoleto’s time from the previous morning.

Day one’s fastest driver, Gabriele Mini, got into the mix with a 1:29.930. However, Bortoleto soon improved again to reclaim P2. This time bringing his time down to 1:29.630.

Roberto Faria in the ART triggered the third stoppage of the morning around the hour mark. By which point, Bortoleto’s Trident ‘test mate’, Goethe, had cleared the no.2 car by thirty-thousandths of a second.

Much of the field spent the next 90 minutes either in the garage or on long runs. The only action of note coming from Nicola Marinangeli, who put his Charouz into the wall at turn 8 – another red flag.

A final stoppage occurred inside the final 10 minutes, but cars were back out on track with seven minutes to go, despite David’s second incident of the morning. Nevertheless, Franco Colapinto’s time proved out of reach and remained unmatched.

The final session of the week saw the F3 teams slowly make their way out on circuit. Jenzer’s Taylor Barnard quickly set the afternoon pace with a 1:31.280. That time remained top as the session approached the half-hour mark. By which point, still only two-thirds of the pack had ventured out from their garages.

As the conclusion of the first hour approached, 29 of the 30 had appeared from the pits. Just Rafael Villagomez of VAR yet to join the others on track. Pepe Martí dropped his best time down to 1:31.489 – good enough for P2, but still some two-tenths shy of Barnard.

The order of the afternoon was more long runs. Save for a few teams – such as Carlin and Jenzer – whose drivers had only amassed a handful of laps each with 60 minutes gone.

With just a couple of installation laps to his name, Sebastian Montoya was the last driver to set a lap time. Elsewhere, much of the field had taken their session lap count into the mid-20s by the halfway stage.

Race simulation runs were still the focus as the session reached its final hour. Barnard remained on top, having only emerged from the pits twice for a total of 11 laps.

By that point, further down the order, some of those on longer runs had registered over 30 laps a piece. But much of the field remained out of their cars.

It was much of the same over the next 45 minutes, as the track remained consistently half-busy. Things got progressively quieter during the final quarter-hour of the test before almost all activity ceased with five minutes to go.

Barnard remained undefeated through the rest of the session. Although his 17 laps completed cut a stark contrast to the vast majority of the paddock.