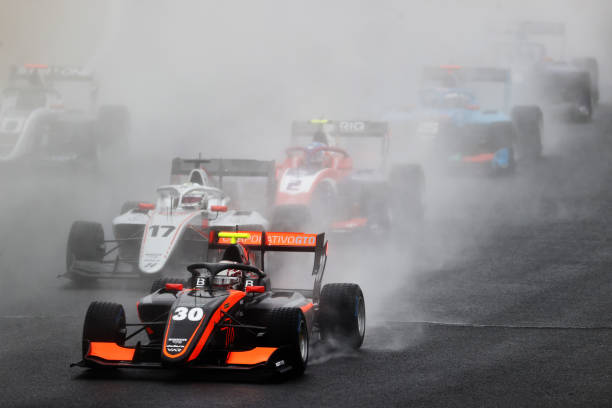 BUDAPEST, HUNGARY - JULY 31: Rafael Villagomez of Mexico and Van Amersfoort Racing (30) drives on track during the Round 6:Budapest Feature race of the Formula 3 Championship at Hungaroring on July 31, 2022 in Budapest, Hungary. (Photo by Dan Istitene - Formula 1/Formula Motorsport Limited via Getty Images)

Smolyar takes the Feature Race win around the Hungaroring

Alexander Smolyar converts pole position into a win after a dominant Feature Race.

As the lights went out Crawford had the better start making up two spaces to take P4. Behind yesterday’s sprint race winner Caio Collet made the move on David Vidales to take P9.

After having his lap time deleted during qualifying, Reece Ushijima was on the charge, moving from P19 to P11.

The yellow flags were brought out after an incident between Jonny Edgar and Oliver Goethe pushed them into the path of championship leader Isack Hadjar.

Moving into lap five, Alexander Smolyar extended his lead at the front of the field to just over five seconds.

Moving into lap eight Arthur Leclerc made the move on Vidales to claim P9.

As the track starts to dry out, the drivers are advised to try and stay in the wet.

In the midfield, the battle for P10 continues into lap 13 between Vidales, Ushijima and Roman Stanek.

Moving into lap 14 Stanek gets the upper hand passing Ushijima for P11.

At the front of the field, a three-way battle was occurring for P7 as Leclerc attempted to pass Collet. However, he was unable to materialise on the move.

A lap later Leclerc made the move on Collet for P8, also passing Gregoire Saucy to take P7.

Smolyar up front, continued to extend his lead as no one could catch the MP.

Goethe who span earlier once again took to the run-off as the driver spun out on lap 22; however, he managed to keep the car running and continued.

As the back markers chose to make the switch to slicks, Zak O’Sullivan placed the highest of the slick runners making his way past Juan Manuel Correa to take P11.

As the battle for P8 continues Saucy passes Collet to take P8, passing his teammate Martins to claim P7.

This is, however, temporary as O’Sullivan makes his way through the field into P7 on the slicks.

Maloney and Bearman continued their battle up until the line. Maloney managed to hold off Bearman long enough to take P2 and claim his first podium of the season so far.

Slightly behind, O’Sullivan managed to pass Jak Crawford to take P4 after starting the race P22.

Formula 3 returns after the summer break to Spa-Francorchamps for round seven.