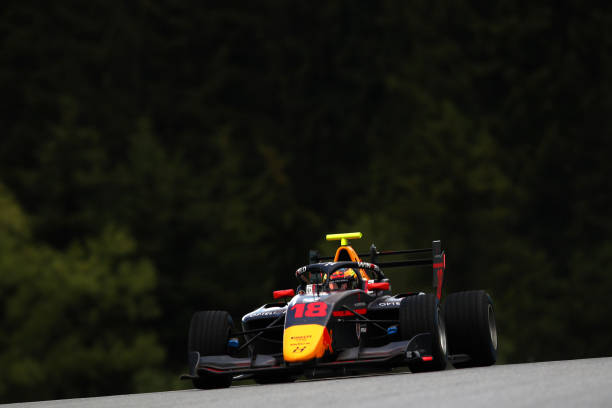 SPIELBERG, AUSTRIA - JULY 08: Isack Hadjar of France and Hitech Grand Prix (18) drives on track during practice ahead of Round 5:Spielberg of the Formula 3 Championship at Red Bull Ring on July 08, 2022 in Spielberg, Austria. (Photo by Joe Portlock - Formula 1/Formula Motorsport Limited via Getty Images)

After a wet practice session, the drivers were running on a dry track for the first time this weekend. As they all hurried out to set their first lap times, Hadjar was the first to take and keep ahold of provisional pole.

David Vidales in the Campos Racing car was the next driver to climb to the top, before Enzo Trulli set a 1:22.730 to take it from him.

As drivers like Nazim Azman and Brad Benavides went off into the gravel briefly during their laps, championship leader Victor Martins set a 1:19.980 and claimed provisional pole for himself.

With 20 minutes still to go in the session Martins was on top, followed by Oliver Bearman, Kaylen Frederick, Roman Stanek, and Jonny Edgar.

Then Zdenek Chovanec had an incident by the pitlane, coming to a halt on the track after a supposed miscommunication with the team. The incident was noted by the stewards and is currently under investigation.

Rafael Villagomez received a black and white flag for exceeding track limits as drivers started to come back into the pits. With half of qualifying completed, Martins was still the driver to beat.

After a few minutes of sitting and waiting and making adjustments, the cars came back on track for their final laps. Bearman had an incident with Carlin’s Zak O’Sullivan, and they collided in the pit lane.

The drivers were all bunched up in a traffic-filled final minutes of qualifying. It was a race to get out first, as everyone wanted a good gap to run in.

By Ben Rudd6 days ago

With less than five minutes left on the clock, drivers started putting in their final laps. At this point Hadjar was the one to dethrone Martins, setting a 1:19.966.

He had gone out at the right time. Not long after and with two minutes to go, the session was red-flagged for Chovanec, who had gone into the wall. The stewards announced that the session would not be resumed.

And so Hadjar claimed his first pole position in Formula 3, ahead of Victor Martins. Bearman in third (for now) is still under investigation for the incident with O’Sullivan. Arthur Leclerc and Kaylen Frederick complete the top five.

The full results of the session can be found here.