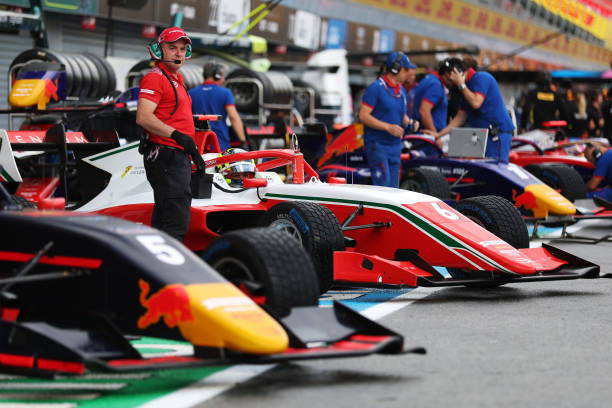 MONZA, ITALY - SEPTEMBER 09: Oliver Bearman of Great Britain and Prema Racing (6) prepares to drive during practice ahead of Round 9:Monza of the Formula 3 Championship at Autodromo Nazionale Monza on September 09, 2022 in Monza, Italy. (Photo by Alex Pantling - Formula 1/Formula Motorsport Limited via Getty Images)

Who will take the title?

In very different conditions to the earlier practice session, the Temple of Speed holds host to the Formula 3 finale.

The Jenzer trio led the grid out onto the track.

Caio Collet claimed the first representative time of the session with a 1:38.918. After a flurry of lap times championship contender, Roman Stanek took the top spot with a 1:38.431. Jonny Edgar claimed P2 with a 1:38.836 while Isack Hadjar took the final podium position with a  1:38.890.

This order however was soon displaced as Juan Manuel Correa claimed P4 with a 1:38.421. Contender Oliver Bearman also improved to P2 with a 1:38.206.

As the championship battle is tight Isack Hadjar’s fight may have ended early as he takes to the gravel at turn 11 after a snap of oversteer. This brought out the red flags, ending his qualifying.

Title contender and second in the championship…

With just over 15 minutes remaining on the clock, racing resumed however as David Vidales took to the track the majority of the field opted to remain in the pits.

With nine minutes remaining the rookie driver Alessandro Famularo had the track to himself as the rest of the field remained in the pits.

As the eight-minute mark was met the field peeled out of the pits. The traffic built on turn 11 as most of the field opted to take through the pits to try to find some space.

Returnee Hunter Yeany brought out the yellow flags after finding the sector one gravel trap. This left the rest of the field unable to improve handing the provisional pole to Smolyar.

As the battle heats up in the top seven, Hadjar found heartbreak after a costly mistake that will see him start P16 in both the Sprint and Feature Races.

Crawford starts in front of the other championship contenders in tomorrow’s Sprint Race which should allow him some advantage. The rest of the contenders are however bunched up between P7 and P11.

Who will take the upper hand?

The top 12 classified as followed;