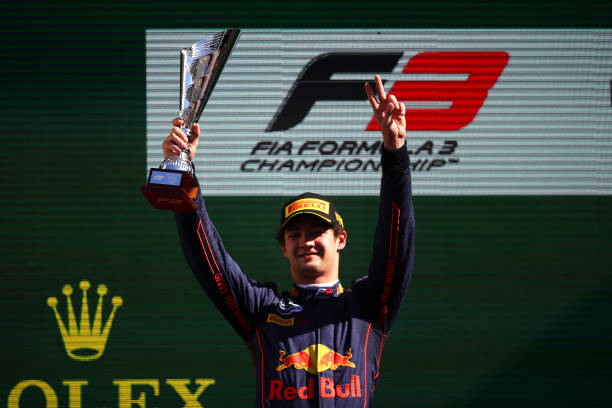 Prema driver Jak Crawford was the first F3 driver in 2022 to score two podiums in one round. He finished third in the Sprint Race, and second in the Feature Race. The American is now fourth in the overall standings, and looking ahead to the next round in Barcelona.

Rain disrupted F3’s practice session at Imola, and all the drivers went into Qualifying without much data to go on. Crawford managed to grab third on the grid behind Zane Maloney and Roman Stanek. This put him ahead of both of his teammates, with Oliver Bearman in fifth and Arthur Leclerc down in 21st after an incident.

Due to the reverse grid format for F3, Crawford started the Sprint Race from ninth. He made up places and had good pace throughout, coming all the way up to fifth. But a surprise incident involving Caio Collet and Isack Hadjar saw the two would be podium finishers drop out of contention.

In the last lap chaos, Crawford was among those who benefitted. He gained two places and inherited a podium with a third-place finish.

In the Feature Race, Crawford’s podium battle was much harder fought. He had to contend with both of his teammates for a spot. But on the penultimate lap, Crawford passed Bearman for second, and thus secured his second podium of the weekend.

Not only was Crawford on the podium for both races, but he was also the only driver on his team to make an appearance on the podium in Imola. Leclerc showed brilliant pace, but starting both races from 21st gave him too much ground to make up. Bearman fought for the win in the Feature Race but an incident with Gregoire Saucy put him fourth,  A post-race penalty dropped him to 17th.

Having scored only six points in the first weekend of Formula 3, Imola was a massive improvement for Crawford.

In the press conference after the Feature Race, Crawford spoke on the effect these results had on his confidence.

It gives me a ton of confidence. Obviously P3 in Quali, P3 in the reverse grid, and P2 in the Feature Race. So yeah, really consistent, solid results. We were always up there during the weekend so you know, we scored lots of points. It gives me a lot of confidence when in Bahrain I didn’t have a good round and you know, I’m sort of doubting myself ahead of time. Once you come into really good results, you feel really good about yourself and yeah I’m feeling good about Barcelona.”

Crawford now sits fourth in the standings, behind Victor Martins, Leclerc, and Stanek. Only four points away from the championship lead, this puts the American driver in a good position to contend for the title.