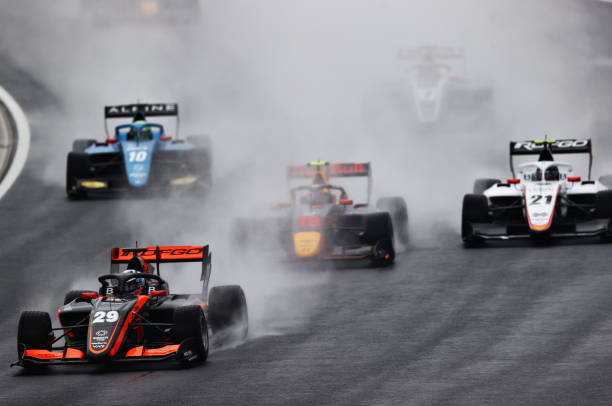 BUDAPEST, HUNGARY - JULY 30: Franco Colapinto of Argentina and Van Amersfoort Racing (29) leads the field at the start during the Round 6:Budapest Sprint race of the Formula 3 Championship at Hungaroring on July 30, 2022 in Budapest, Hungary. (Photo by Dan Istitene - Formula 1/Formula Motorsport Limited via Getty Images)

Caio Collet claimed victory on Saturday at the Hungaroring

MP Motorsport’s Caio Collet took victory by six seconds over Franco Colapinto and Kush Maini in a wet race at the Hungaroring.

Polesitter and Formula 3 newcomer Oliver Goethe was under pressure from Franco Colapinto even before the start. Due to the rain the drivers took a rolling start, and Colapinto took the lead of the race as they headed into Turn 1.

In the next few corners Goethe slipped to fourth as Isack Hadjar took second place and Caio Collet took third. But the racing didn’t continue for long, as Campos Racing’s David Vidales hit the wall during the first lap and brought out the Safety Car.

The track was starting to dry a bit as the Safety Car ended after Lap 3. Colapinto lead the field at the restart, but was under pressure from Hadjar and Collet by Turn 1. While Colapinto held first place, Collet took second from Hadjar.

The top two began a tense battle for the lead, that lasted until Lap 5 when Brad Benavides made contact with Ido Cohen and brought out the Safety Car yet again.

By Lap 8 the drivers were racing again, and Colapinto was again under pressure from both Collet and Hadjar behind. While Hadjar briefly took second place, Collet regained the place moments later. Maini, on the other hand, made his move on Victor Martins for fourth place stick.

Martins quickly slipped down to sixth, and was under pressure from Arthur Leclerc. Meanwhile, Collet was getting ever closer to Colapinto, and by Lap 10 was finally able to make a successful move and take the race lead.

Once Collet got into the lead, he pulled away from the rest of the pack. Two laps after passing Colapinto he had a gap over two seconds between them. As the track got drier and drier, Collet went faster and faster, setting several fastest laps throughout the middle stages of the race.

Behind him, everything settled down for a little as the tyres started to fall off. Then, on Lap 16, Maini overtook Hadjar for third place. Hadjar then fell down to sixth with a loss of pace. But Maini was far from safe, as Jak Crawford was closing in on him.

On the final lap, Crawford and Leclerc, running fourth and fifth, made contact and both dropped down the order. That incident allowed Hadjar and Oliver Bearman to take fourth and fifth.

Collet took victory by a massive margin, with championship leader Martins in sixth. Gregoire Saucy, Oliver Goethe, Roman Stanek, and Zane Maloney made up the rest of the points scorers.

Formula 3 returns tomorrow for the Feature Race in Hungary, with Alex Smolyar starting on pole.