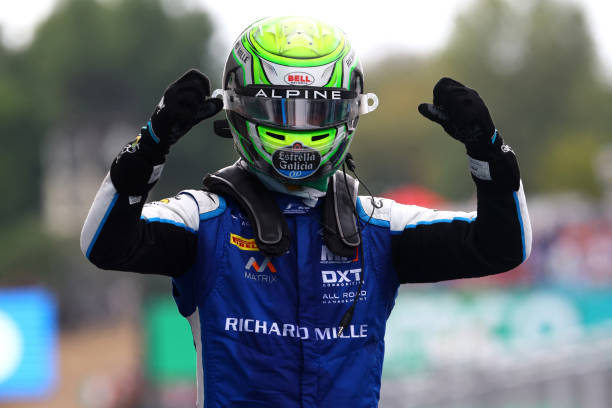 BUDAPEST, HUNGARY - JULY 30: Race winner Caio Collet of Brazil and MP Motorsport (10) celebrates in parc ferme during the Round 6:Budapest Sprint race of the Formula 3 Championship at Hungaroring on July 30, 2022 in Budapest, Hungary. (Photo by Mark Thompson/Getty Images)

FormulaNerds spoke to Caio Collet after the Formula 3 Sprint Race

The Formula 3 Sprint Race at the Hungaroring saw lots of on-track action and battles between the 30 drivers. Oliver Goethe, subbing for Hunter Yeany of Campos, started the race on reverse grid pole, but it was Caio Collet who took the victory after starting P4.

Franco Colapinto snatched the lead after a rolling start behind the safety car but pressure from Collet forced him into an error, allowing the MP Motorsport driver to sail past. This win for Collet was a long-awaited victory.

2022 has seen the Brazilian driver grace the steps of the podium twice already this season. He finished the Sprint Race in Barcelona in P3. Last time out in Austria, he finished P2 on the Saturday.

His start to the season saw him suffer two DNFs in the opening rounds, one in the Bahrain Feature Race and another in the Imola Sprint Race. However, since Imola, Collet has seen the chequered flag in every race.

His best Feature Race result was at Silverstone where he maintained his P4 qualifying position, finishing just outside the podium. As a result of his consistent point-scoring positions, Collet currently sits eighth in the Driver Standings on 50 points as the Formula 3 grid head into tomorrow.

After the Sprint Race, Collet spoke to FormulaNerds about his race victory. He specifically spoke about the impact of safety cars. There were two safety cars in this morning’s session. One for the incident that saw David Vidales hit the wall during the opening lap and another for the contact between Brad Benavides and Ido Cohen.

Collet was battling for the lead with Franco Colapinto when the first safety car came out. He then needed to defend on the second safety car restart.

The privilege of an F1 fan on the European continent

By Tenesha Roue20 hours ago

“Since the beginning of the race we knew we were going to struggle with tyres. I was trying to cool them down as much as I can. But also it’s quite tricky because everyone’s really close and you need to have them ready to attack in the first few laps.

“That is something that I think we managed well today. Both safety cars I was trying to attack. I think we did a pretty good job today, but yeah there’s always an unknown situation a little bit. But today I think it helped that we managed them really well.”

Tomorrow the prediction is to have a drier race than today. However, Formula 3 has a very competitive field this season, so to predict tomorrow’s result is not an easy task.

But it’ll be Collet’s teammate Alexander Smolyar starting on pole in Sunday’s Feature Race so MP Motorsport could have a good result.