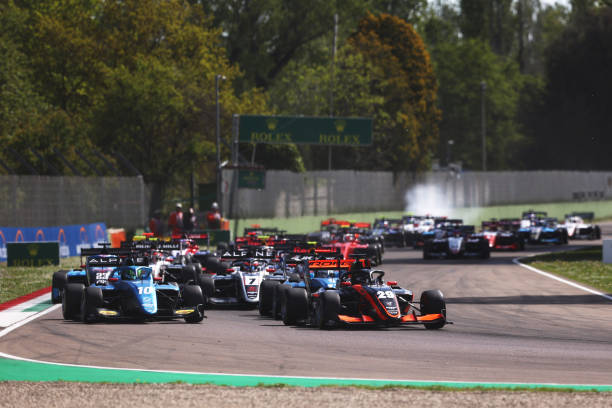 IMOLA, ITALY - APRIL 23: Franco Colapinto of Argentina and Van Amersfoort Racing (29) leads Caio Collet of Brazil and MP Motorsport (10) and the rest of the field at the start during the Round 2:Imola Sprint race of the Formula 3 Championship at Autodromo Enzo e Dino Ferrari on April 23, 2022 in Imola, Italy. (Photo by Alex Pantling - Formula 1/Formula Motorsport Limited via Getty Images)

Starting from pole position, Colapinto had an excellent start and immediately pulled away from Ido Cohen in second. Cohen dropped to fifth as MP Motorsport’s Kush Maini made his way up to take second place.

The first incident of the race came on lap 2 when Oliver Bearman took a brief trip into the gravel before coming back onto the track. He fell down the order and dropped out of the top 20.

DRS was enabled by lap 4, and Caio Collet, who had made his way from fourth, passed Colapinto for the lead. Further down the field, a battle for the podium began between Maini and Isack Hadjar. Hadjar made the pass several laps later and secured third place.

Meanwhile, Bearman was setting fastest lap after fastest lap, and had found his way up to 18th. He then got into a fight with his teammate, Arthur Leclerc, which left Bearman spinning on lap 8 and the British driver was once again sent to the back of the field.

The first safety car of the race was deployed on Lap 8, after what looked at first to be an incident between Zak O’Sullivan and Pepe Marti. The two ended up in the barrier on the exit of Rivazza, which lead to a VSC and then a full safety car.

Although it initially looked like the two had collided, replays showed that first O’Sullivan and then Marti had lost their respective cars going into the corner. They ended up together in the barrier, but they never made contact on the track.

During the safety car Collet continued to lead. Maini, in fourth, received a drive through penalty for being out of grid position at the start of the race. He served that penalty after the safety car came in on lap 12, and fell to the back of the grid.

On the restart, Hitech’s Kaylen Frederick came together with Cohen, and Cohen lost a part of his front wing. Further back, Bearman was once again making his way up the order and recovered to 18th.

Just one lap later, Reece Ushijima of Vans Amersfoort Racing came together with Jenzer’s Frederico Malvestiti. The two went into the gravel, and the second safety car of the day was called out.

Cohen pit during the safety car to change his front wing, and lost positions. After the restart on lap 17, Collet continued to lead the field. Hadjar, who had been fighting in the podium positions for most of the race, grappled with Colapinto for second.

ART’s Gregoire Saucy had contact right after the restart, but it was Leclerc who brought out a VSC with just three laps to go. The Prema driver went into the grass and ran through several of the polystyrene boards, spreading debris all over the track.

They were racing again by the final lap. Colapinto closed in on Collet for the lead, and made the pass early on in the lap. Immediately after, Collet made contact with Hadjar in third. The driver who had led most of the race dropped outside the top 20.

Having made the pass, Colapinto breezed through to take his first Formula 3 win in his second weekend in the series. Vans Amersfoort also took their first win in the series.

In the chaos, Victor Martins and Jak Crawford snuck into the podium positions. The rest of the points finishers were Roman Stanek, Hadjar, Zane Maloney, Oliver Rasmussen, Frederick, Alex Smolyar, and Rafael Villagomez. The full results can be found here.

While Colapinto took a win from pole position today, it’s Trident’s Zane Maloney who will start from pole in the Feature Race tomorrow.