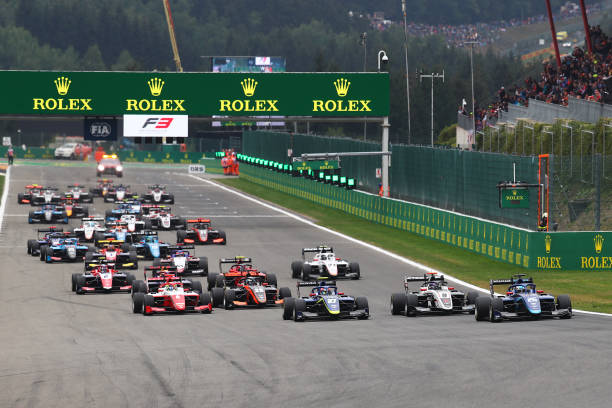 SPA, BELGIUM - AUGUST 27: Zak O'Sullivan of Great Britain and Carlin (26) leads the field into turn one at the start during the Round 7:Spa-Francorchamps Sprint race of the Formula 3 Championship at Circuit de Spa-Francorchamps on August 27, 2022 in Spa, Belgium. (Photo by Joe Portlock - Formula 1/Formula Motorsport Limited via Getty Images)

As the championship battle heats up who will take the crown?

As the lights went out Caio Collet maintained his position. Zane Maloney attempted the move but was forced onto the run-off, gaining position on Collet.

Kush Maini was spun round by Francesco Pizzi leaving him in the middle of the track. As a result championship leader Victor Martins was caught up in the chaos putting him out of the race and bringing out the Safety Car.

Multiple cars are involved – it's a chaotic end to the first lap 😅#BelgianGP #F3 pic.twitter.com/AbVyPfgOAp

Moving into lap three, as Maloney was forced to give position back to Collet, rookie Oliver Goethe took the race lead.

As the Safety Car came in at the end of lap five, Goethe controlled the restart, but was under pressure from Collet. He was passed by both Collet and Maloney on the Kemmel Straight.

A dampener was put on Collet’s day, however, as he was handed a five-second penalty for an unsafe rejoin on the opening lap.

Further behind, Roman Stanek also made the move on Goethe, pushing him up to P3.

The Safety Car was brought out once again at the end of lap seven as Gregoire Saucy made contact with the barriers after an incident with Marti, putting himself out of the race.

Saucy is off into the gravel and subsequently the barrier 😬

Driver is out of the car and OK 👍#BelgianGP #F3 pic.twitter.com/shdlUc89PU

Moving onto lap 11, the Safety Car came in, Collet maintaining his lead. This, however, wasn’t without pressure from the two Tridents behind. Maloney took the race lead around the outside of Les Combes, leaving Collet vulnerable to his teammate.

As Maloney pulled away at the front of the field, Maloney and Stanek behind battled for P2.

The battle between yesterday’s race winner Oliver Bearman and Johnny Edgar continued through lap 13 but Bearman couldn’t pass the trident.

In the midfield, Reece Ushijima passed Brad Benevides to see himself into the points. At the front of the field Maloney passed Collet once again to take P2.

Just behind, Bearman gained the upper hand of the battle, passing Edgar at the start of lap 15.

After a continuing battle in the midfield, championship contender Arthur Leclerc passed both Zak O’Sullivan and Brad Benevides to take P11.

His teammate Bearman, however, battled at the front of the field with Goethe for P3, but he was unable to materialise a move.

In a last lap effort, Bearman made the move, passing Goethe into Les Combes.

At the front of the field Maloney crossed the line to take his maiden Formula 3 win. teammate Stanek behind him claiming a Trident one-two.

Collet came across the line in P3 but dropped to P6 after his penalty. As a result Bearman was promoted to the podium.

Following the Feature Race only five points separate the top four. Bearman made his way into P2 with 105 points, only four points ahead of teammate Leclerc in P4.

Formula 3 continues onto Zandvoort for round eight.