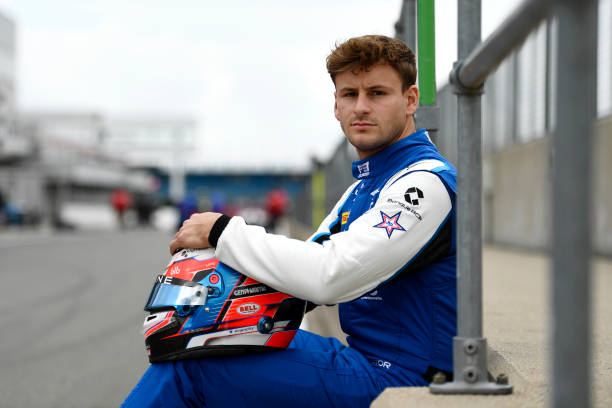 NORTHAMPTON, ENGLAND - JUNE 30: Feature Race winner at Round 3:Barcelona, Victor Martins of France and ART Grand Prix (7) poses for a photo during previews ahead of Round 4:Silverstone of the Formula 3 Championship at Silverstone on June 30, 2022 in Northampton, England. (Photo by Rudy Carezzevoli - Formula 1/Formula Motorsport Limited via Getty Images)

After becoming the Formula 3 champion, Victor Martins will be moving up to Formula 2 with ART Grand Prix.

The Frenchman clinched the Formula 3 title by just four points over Zane Maloney in 2022. While he only took two race wins over the course of the season, he consistently finished inside the top ten and scored good points. In fact, Martins only finished outside the points in one race (barring his three retirements).

After two successful seasons in Formula 3, Martins will make the step up to Formula 2 in 2023, joining Theo Pourchaire at ART Grand Prix. His fellow Frenchman will be competing in his third Formula 2 season and provide a more than adequate benchmark for the reigning F3 champion.

“The 2023 season will be exciting and motivating,” commented Martins. “After a successful year with ART Grand Prix, I was not considering taking the next step with any other team. I can’t wait to discover the Formula 2 championship, which is tough and competitive, with such a professional and experienced team.

“The tests made it possible to remove what little doubts I might have had about my adaptation because I felt comfortable and confident. My objective will therefore be to do everything possible to win the title in my first year. With ART Grand Prix, I have all the tools to have big ambitions.”

For ART team principal Sebastien Philippe, putting Martins in their Formula 2 lineup was a no-brainer.

“Taking up the challenge of Formula 2 in 2023 with Victor is a logical continuation after an intense year which concluded with the first ART Grand Prix title in the modern era of Formula 3,” he said.

“Victor made enormous progress in 2022 and has proven that in both difficult personal and sporting conditions, he has the mental strength and the talent to achieve great things at the highest level of motorsport.

“The Abu Dhabi tests confirmed his ability to adapt quickly and well to his new single-seater. His determination, his enthusiasm, and his conquering spirit will be weapons in a championship where competition is fierce.”

Martins’ signing means that the Formula 2 grid is almost complete. Just one spot remains at MP Motorsport remains before everything is said and done for the 2023 season.