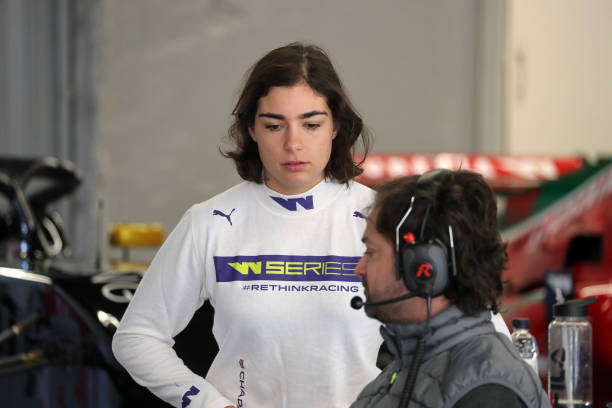 Jamie Chadwick, from Veloce Racing, during the W Series testing at the Barcelona-Catalunya Circuit, in Barcelona, on 03th March 2022. (Photo by Joan Valls/Urbanandsport /NurPhoto via Getty Images)

Bruno Michel, CEO of F2 and F3, outlined the steps that must be taken for female drivers to succeed. He also commented on Jamie Chadwick’s decision to remain competing in W Series for another season.

After winning the title twice, fans were left perplexed as to why she did not progress to another series for 2022.

Bruno Michel made it clear that she was welcome in Formula 3, saying that he didn’t “really understand why she couldn’t get a seat”.

“There were teams that were ready to take her,” he explained. “I know there’s been discussion with one team, I don’t know what happened at the end.

“I think it’s a pity because I think she would be ready for Formula 3 and she’s not here, and she’s got to do another year in W-Series. It is what it is and she decides what she wants to do.”

Chadwick previously suggested that the major problem was a lack of funding. This is in spite of her being a member of Williams Racing Driver Academy for four years.

Team principal Jost Capito recently faced backlash for comments made about her career path. As Williams supports Chadwick, it was initially believed that the team would help her to secure a seat, with the eventual aim of reaching F1.

Chadwick addressed the controversy of her deciding to stay in W Series for another season on her Twitter:

What were the previous attempts to increase diversity?

There has not been a female F1 racer since Lella Lombardi competed 45 years ago (not including test drivers). Calls for greater diversity in motorsport have risen drastically in recent years as a result.

Championships such as Formula 3 are attempting to make big changes in this area.

Exposure is key for these drivers, and numerous projects are in place to ensure this.

What are the current plans for future female competition?

Michel stated that F3 is currently working with both projects to try and get a female racer in his championship.

The CEO added that any woman wishing to compete in the series must be completely ready.

In his view, they should not have a seat for the sake of it, but should instead be able to regularly qualify in the top 12.

He said: “We absolutely need to prepare young female drivers to get them to the level of Formula 3 with success.

“If it’s to be at the back of the grid, it would be counter-productive because we will have many people saying ‘look!’, which is exactly what we don’t want.

“We strongly believe that there is absolutely zero reason that a female driver cannot achieve the same result as a male driver, but it’s a question of preparation.”

Michel outlined plans to carry out another testing session this year, but expressed frustration that this alone is “not enough”.

There are clearly numerous initiatives to end the idea that motorsport is a boys’ club. However, it seems that fans will have to wait a while longer to see a female driver in top championships.