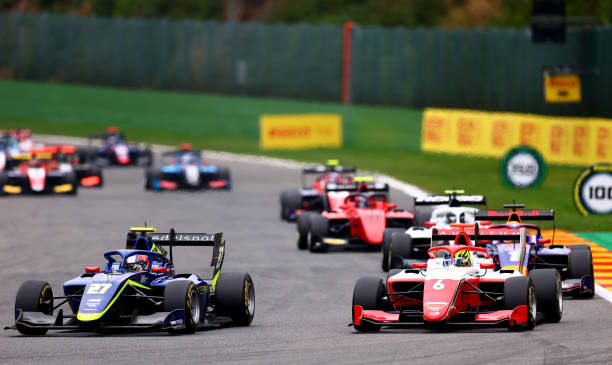 SPA, BELGIUM - AUGUST 27: Brad Benavides of United States and Carlin (27) and Oliver Bearman of Great Britain and Prema Racing (6) battle for track position during the Round 7:Spa-Francorchamps Sprint race of the Formula 3 Championship at Circuit de Spa-Francorchamps on August 27, 2022 in Spa, Belgium. (Photo by Dan Istitene - Formula 1/Formula Motorsport Limited via Getty Images)

In an incident-packed Formula 3 race in Spa, Oliver Bearman took victory ahead of Roman Stanek and Alexander Smolyar.

Carlin’s Zak O’Sullivan got away well from pole position, but was closely followed by Brad Benavides and Juan Manuel Correa. All three of them fought for the lead on the opening lap, Correa being the first to snatch the lead from O’Sullivan.

But then the two drivers made contact, which ended in Correa receiving a puncture and O’Sullivan taking front wing damage. Benavides took the lead as the other two fell back.

Bearman had made up places to find himself right behind the Carlin driver and even by the end of the first lap was fighting for the lead.

On the second lap, Charouz’s Christian Mansell went into the wall and his race came to an end. The Safety Car came out to recover his car as all the drivers took a breath to recover from the opening lap.

Before the Safety Car came out, Bearman had stolen first place from Benavides. Jonny Edgar was behind them, with Oliver Goethe and Alex Smolyar completing the top five.

The Safety Car came back in after lap 5, and all the drivers got away smoothly. Edgar overtook Benavides and Smolyar overtook Goethe, slightly mixing up the top five.

Goethe then went a little wide, allowing Roman Stanek to take fifth place from him. On lap 6, Zane Maloney tried to overtake Goethe going into the Blanchimont corner, and the two made contact.

Both went off into the gravel in a high-speed accident. Fortunately, both drivers got out of the car after a nasty crash. The Safety Car came out and was soon followed by a red flag to repair damage to the tyre barrier.

Several drivers stood a lot to gain from a red flag, having made up places to get into the top ten beforehand. Bearman was still in the lead of the race. William Alatalo started the race from 13th, and took the restart from sixth place. Reece Ushijima in seventh place had started from 16th.

Arthur Leclerc was one of four main title contenders to start outside the top 12, but made his way from 20th to tenth place by the time the red flag came out.

After a lengthy delay to fix the tyre barrier, Formula 3 got racing again for the final six laps. Bearman had an excellent getaway after a rolling restart and pulled away from the rest of the pack.

It was a less fortunate restart for Alatalo, who went wide on the start/finish straight and dropped from sixth to tenth. Further up the field, Benavides and Edgar fought for second, and Smolyar and Stanek fought for fourth place.

In the final laps several drivers took better positions. Leclerc made his way all the way up to fifth place, with Alatalo recovering from his earlier incident to regain sixth place.

In the end, Bearman took his maiden victory by over a second over Stanek and Smolyar. Edgar, who had incurred a penalty earlier in the race, finished fourth ahead of Leclerc. Then it was Alatalo, Vidales, Benavides, Hadjar, and Collet who completed the top ten.

Just outside the top ten was Jak Crawford, who started from last place after an incident in Qualifying but made his way up to finish 11th in the race.

After an interesting race for the title contenders, they’ll all be back to their original qualifying positions for tomorrow’s Feature Race in Spa.