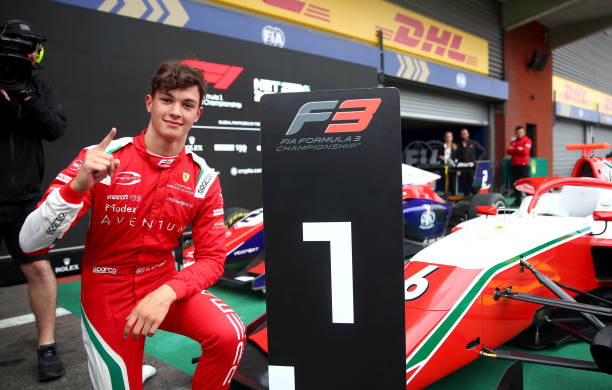 F3 Bearman: Need to “show what I can do”

Ollie Bearman won his maiden F3 race in his debut at Spa-Francorchamps.

Formula 3 completed the first race of the triple-header today at Spa-Francorchamps. PREMA’s Bearman made his debut at the circuit this weekend. Despite not having raced here before, the young Brit excelled during the race.

Bearman started fifth after qualifying eighth and the reverse grid. His grid position meant that he is the only driver in the top five of the championship who started within the top 19. His teammates Arthur Leclerc and Jak Crawford made up several places, but it was Bearman who took victory for the team.

An incident at Turn 6 in the opening laps switched up the order of drivers, and Bearman was able to take the lead. He held onto the lead after the red flag, where the race restarted with a rolling start behind the safety car.

In the press conference after the race, Bearman commented on the restart saying it was “tough” as the “last place you want to be” is on pole because overtaking is fairly easy at the Belgian circuit. However, he managed to “pull a gap” from those behind and stay out front.

Having won today’s race, Bearman adds some points to his championship contention. FormulaNerds asked the PREMA driver how being in the title fight affects his mindset and his approaches to the triple header.

Going into this weekend, Bearman was fifth in the championship on equal points (80 points) as Crawford. The two were 15 points behind Leclerc. With his teammates finishing fifth (Leclerc) and 11th (Crawford) and Isack Hadjar and Victor Martins finishing outside the top five, the young Brit is a key player in the championship.

Speaking to FormulaNerds, Bearman said his approach for the final races is:

“I’m taking it race by race, trying to score the maximum points.”

A sprint race offers drivers fewer points than a feature race. But for Bearman, finishing on the top step has “been a long time coming.” The victory has given him “good confidence” because “getting the win” is another step forward.

With five races left across three rounds, Bearman needs to “show what [he] can do” and score as many points as possible.

Spa had some changes to the circuit with more gravel traps being added. After some red flags across all three championships this weekend, it’ll be key for Bearman to have a clean race.