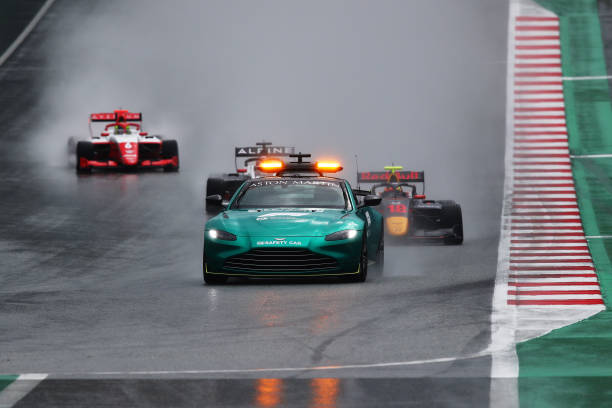 With just one point separating the top two in the standings, who leapt ahead in Sunday's feature race?

Going into today’s race, championship leader Victor Martins was on 80 points whilst Prema’s Arthur Leclerc snuck up behind on 79. It was all to play for at the Red Bull Ring.

The rain began to pour down before the early morning race, triggering a rolling start.

As the cars kicked up tremendous amounts of spray, it was understandably a fairly cautious start to the day. Polesitter Isack Hadjar focused on staying on the track which allowed him to stay ahead of Martins.

However, there was a close moment as the Red Bull junior took a trip off track at turn one. Martins closed up to the leader, finding himself around four-tenths behind.

It was a fascinating battle between the two frontrunners – they developed a gap of two seconds to Bearman in third place. Hadjar and Martins repeatedly took different racing lines, but Hadjar maintained his lead.

There were close fights throughout the field with rookie Zak O’Sullivan overtaking William Alatolo for 15th place. The tricky conditions did not phase Campos drivers David Vidales and Pepe Marti who continually exchanged 17th place. They inevitably touched, but it was not enough to significantly affect their driving.

The track dries up

As a slightly drier racing line emerged, race leader Hadjar found his rhythm. He built a gap of over two seconds back to Martins and claimed numerous fastest laps.

With 15 laps to go, this title was snatched by Leclerc, Martins, and Alexander Smolyar who was all the way down in 12th place.

The closest battle on track was between Caio Collet and Zane Maloney, with the former aiming for ninth position. The Alpine junior finally got through on lap 13 before he almost went into the gravel. His error meant Maloney stayed close behind, but Collet managed to hold on to the position.

Meanwhile, a battle between two Charouz racers saw Francesco Pizzi spin Zdenek Chovanec off track before Federico Malvestiti spun behind them. The yellow flag was brought out, and Pizzi was handed a 10-second time penalty for the collision.

Looking back to the front of the pack, Hadjar built a lead of four seconds over his nearest rival, Martins.

It was the fight for 15th that was far more interesting. Marti bumped into the back of O’Sullivan, and two Campos drivers behind also collided with each other.

Teammate battles were a key feature of the feature race. Leclerc closed up on Ollie Bearman, hunting down the final podium position.

With five laps to go, the yellow flag was flown once again. There was yet another incident between Chovanec and Pizzi, with the former finding the gravel.

As his car was beached, the safety car emerged from the pits to close the pack up. Hadjar’s strong race lead over Martins vanished – it would be a three-lap sprint to the finish.

The lapped Malvestiti separated the two frontrunners, providing an obstacle for Martins. Hadjar sped away whilst there was carnage further back, dropping Collet and Crawford down the order.

Kaylen Frederick was initially fighting for fourth place, but a collision with Stanek gave him a devastating puncture. This allowed Zane Maloney to capitalise on the mistakes around him and improve to fifth.

With Martins taking his fifth podium of the season, he maintains his lead in the standings. However, he now has Isack Hadjar to fear. Hadjar’s win means that he is now only one point off of the lead – not too bad for a rookie.