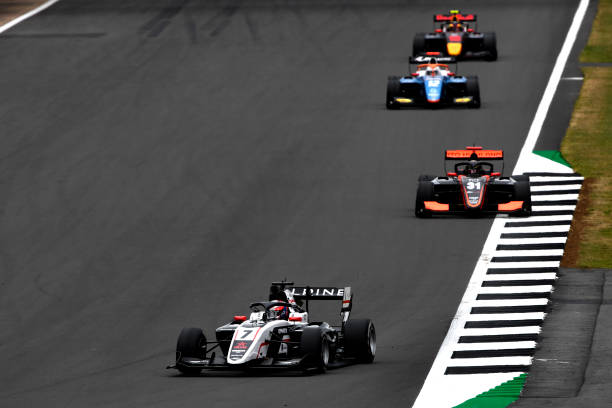 F3: A three-way battle for the win in Silverstone

The tense race was a brilliant start to the weekend

Silverstone never fails to excite; a three-way battle saw Isack Hadjar take his second win of the season in a last-minute move for the lead.

There was drama before the race even began as Carlin’s Brad Benavides slowed on the formation lap. To the confusion of many, he passed the pitlane which forced an aborted start.

For Reece Ushijima, the combination of leading a race for the first time and being under pressure from championship leader Victor Martins proved disheartening. The Alpine junior rapidly took the lead, leaving Ushijima at risk from Kush Maini.

There were some tense defensive moments for Maini and Hadjar as the two battled for third place. Despite coming close to contact, the sprint race got off to a clean start.

A four-way battle for the lead

Whilst you could not be blamed for expecting rookie Ushijima to drop back, the VAR driver actually stuck right with Martins. Over laps three and four, he attempted to pass Victor Martins but failed to find a way through.

The two likely hoped to race away from the pack, but Hadjar was not far behind. He successfully passed Maini for third and refused to let the leaders out of his sight.

All eyes remained on Ushijima and Martins as the Japanese-American driver continued to put pressure on the race leader.

Stowe corner seemed to be a point of contention for the frontrunners. After being forced off track by the Frenchman, Ushijima saw Red Bull junior Hadjar creep up behind him.

By lap seven, just 0.8s separated the top four. It seemed that Hadjar and Ushijima could go side by side through Maggots and Becketts, but the eventual overtake came at Stowe corner.

There were further improvements for Prema as Leclerc passed Bearman for ninth. However, their healthy teammate relationship was not replicated throughout the field.

Laszlo Toth and Zdenek Chovanec, who both compete for Charouz, collided an impressive three times as the latter tried a questionable overtake. Consequently, the safety car came out.

With the pack closed up, the question was whether Martins would be able to maintain his dominant lead. Hadjar looked faster before the safety car and searched for his second sprint race victory.

The restart came with five laps to go. Martins had an excellent start and kept his lead as Kaylen Frederick chased down Maini.

However, Isack Hadjar refused to let the race win slip away from him. He stayed less than half a second behind Martins, but was repeatedly unable to pass. The fight between the two led to Ushijima once again catching up to the leaders.

It was incredibly tense over the final couple of laps. There were times when it seemed Martins would dominate in a similar manner to the rest of the season. No one ever thought a rookie could beat him at the last minute, but that’s exactly what happened.

17-year old Hadjar made a mighty overtake on the penultimate lap; the win was within his reach as Martins fell back.

The young Red Bull driver charged over the finish line with the Frenchman still close behind. Initial polesitter Ushijima held onto a podium finish, taking third place. Meanwhile, Maini’s fourth place is at risk as he is under investigation for failing to follow the race director’s notes.

By Francesca Herring11 hours ago