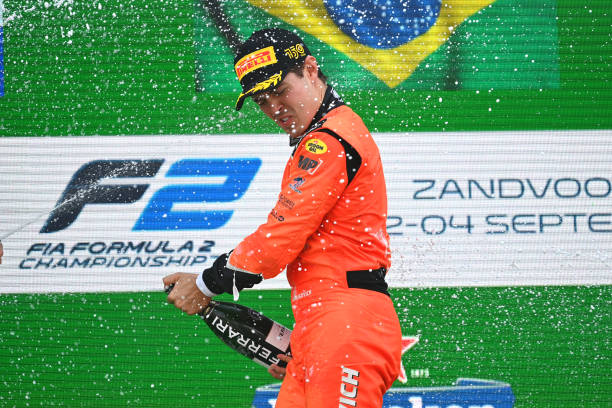 Felipe Drugovich of MP Motorsport achieved his first victory today since Monaco, in the Feature Race that has extended his championship lead.

Formula 2’s weekend in Zandvoort concluded with the Feature Race that saw a red flag and two Safety Cars. Five drivers retired from the race after incidents on track.

But for Brazilian Drugovich, the race went the best it could. On Friday, Drugovich qualified on pole with a time of 1:20.713. In the Sprint Race, Drugovich was P10. Zandvoort is known to be difficult to overtake on and that proved correct as he finished the Sprint Race in P10, just two places shy of the points.

However, the Feature Race saw a dominant drive from Drugovich despite all the disruptions. After the race, FormulaNerds asked him about his start.

Over the course of the weekend, those who started on pole failed to maintain the lead going into Turn 1. It looked as though the driver in P2 would have the advantage.

FormulaNerds spoke to Drugovich about this as he was the only pole-sitter across both feeder series to maintain the lead from P1. He said:

“I was seeing the other starts and it didn’t look like P1 had a massive advantage, so yeah I was focusing to get a good start. First of all, safe, I don’t think I was in a position to risk it all.

“But I really wanted to get the job done and to do that I needed a good start. I think I managed it. There’s also a crest in the middle of the circuit a little bit to the left, where the P1s are starting so, it was a little bit tricky to start there and close the door. But I managed to do a good start so it was fine for me.”

Théo Pourchaire, Drugovich’s closest rival in the championship, only scored one point today. The Frenchman had a tough race due to the safety cars, but on the final lap he managed to work his way through to 10th.

By James Mackenzie3 days ago

However, after today, Drugovich has extended his championship lead after scoring 25 points. This means that the Brazilian could win the title next weekend in Monza.

Formula 2 spoke to Drugovich in the post-race press conference about the championship and whether or not he feels he has one hand on the trophy.

He said: “We just need to keep doing whatever we’re doing. It’s working so I’m very grateful for this. Hopefully we can get the title [in Monza]…I think now I’m in a position where I can just go for it and try to score more wins I think.”

With only four races left across two rounds, the fight is on. Pourchaire will need to score the maximum points to close the gap to Drugovich after an unfortunate weekend in Zandvoort. But it’s looking like Drugovich will clinch the championship.

Formula 2 returns next weekend in Monza for the penultimate round of the season.