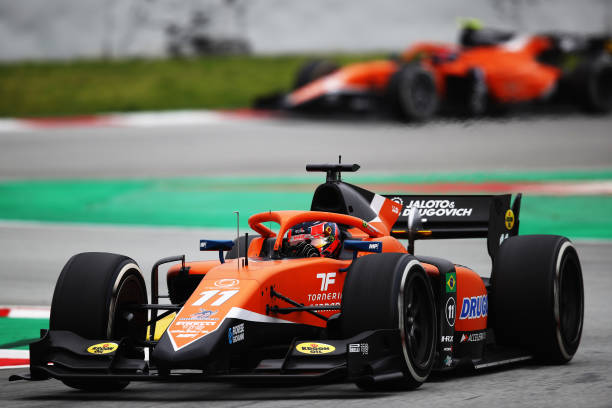 After both cars scored points in Imola, MP Motorsport top the F2 Championship for the first time in their history.

After both cars scored points in Imola, MP Motorsport top the F2 Championship for the first time in their history.

The Dutch outlet sees itself at the top of the Formula 2 Team Championship for the first time after nine years in the series. Their line-up consists of returnee Felipe Drugovich who is currently second in the Drivers Championship. Joining him is rookie Clement Novalak who finished third in the 2021 Formula 3 Championship.

Following a strong pre-season test in Bahrain, MP went into Round 1 on the front foot bringing home a strong points haul. Drugovich placed 5th in the Sprint Race and 6th in the Feature Race claiming four and eight points respectively. Novalak however had an unfortunate weekend collecting damage after a collision with Van Amersfoort Racing’s Jake Hughes resulting in a 10-second penalty. The French driver also had to retire from Sunday’s Feature Race due to engine failure.

Moving into Round 2 in Jeddah, Drugovich’s luck improved. The Brazilian placed P3 in the Sprint Race as well as winning the Feature Race collecting 33 points over the weekend. Novalak’s results also showed improvement placing P11 and P14 respectively in the Sprint and Feature races.

A wet weekend in Imola saw MP take the lead. Drugovich making up six places alone in the first lap of the Sprint Race to finish 5th overall. Novalak’s race however was dampened due to a collision with Beckmann leaving him at the back of the pack. Novalak’s position did improve during the

Feature Race finishing P4, his highest F2 finish so far. Speaking to Formula 2 after the race Novalak said his first points haul “brings us a lot of confidence going forward”.

Drugovich finished P10 after a late pitstop under the safety car claiming the last of the points.

For the first time this season both cars finished in the points, propelling them into the lead of the Team Standings. Since joining the GP2 series in 2013 (now Formula 2) the team has never led a Team Championship in the series. The Dutch team will be looking to continue with their so-far successful campaign.

Formula 2 returns for Round 4 in Barcelona between the 20th-22nd May.