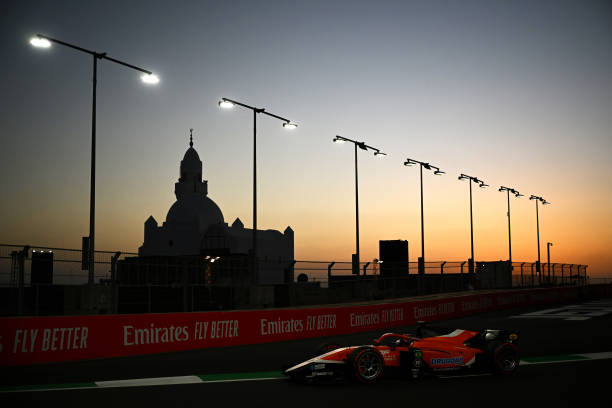 JEDDAH, SAUDI ARABIA - MARCH 25: Felipe Drugovich of Brazil and MP Motorsport (11) drives on track during qualifying for Round 2:Jeddah of the Formula 2 Championship at Jeddah Corniche Circuit on March 25, 2022 in Jeddah, Saudi Arabia. (Photo by Clive Mason/Getty Images)

Drugovich takes pole with Verschoor P2 and Doohan following closely behind in P3 after a dramatic qualifying session at the Jeddah Corniche Circuit.

Drugovich takes pole with Verschoor P2 and Doohan following closely behind in P3 after a dramatic qualifying session at the Jeddah Corniche Circuit.

After this morning’s session, Charouz’s Cem Bolukbasi was transferred to the hospital for precautionary checks following his shunt in this morning’s practice session.

ART GP had an intensive repair job after Pourchaire’s crash in the earlier Practice session allowing him to take part in this evening’s Qualifying session.

Following the first set of benchmark laps, Boschung topped the times. This was soon in jeopardy as MP Motorsports Felipe Drugovich took advantage of the clear track setting purple sectors. Unfortunately, this wasn’t quite enough with Boschung topping his own time once again going purple in all three sectors.

Hughes crosses the line just in time as further down the circuit Theo Pourchaire’s luck is ever fading as his car bursts into flames, bringing out the red flags.

After clearing the track the session resumes with 18 minutes left on the clock. As the pit lane reopens traffic builds up on the track. Boschung starts a flying lap going purple in both sectors however this is quickly diminished by a Red Flag.

The Red Flag in question was caused by Carlin’s Logan Sargeant who had hit the wall at Turn 17 spinning into the centre of the track.

With just over 12 minutes on the clock, the session resumes. Iwasa leads the procession out of the pitlane. Using this clear track he pulls out an amazing flying lap topping the times with a 1:41.194.

During Boschung’s flying lap contact is almost made with Vesti however this incident is still being investigated.

Moving towards the end of the session we see a stoppage with just under 5 minutes to go as the medical car circles the track.

As the session resumes once again the top two drivers Armstrong and Boschung do not return for more track time, staying in the pits.

The last minute scramble also saw Trident’s Richard Verschoor push himself up to P2 with a 1:40.648.

As the chequered flag is waved Doohan is still on a flying lap improving to P3 with a 1:41.024.

Drugovich takes the 2 points for pole position with the grid lining up for tomorrow’s Sprint Race as follows.

By Morgan Holiday24 hours ago

All results and standings can be found on the FIA Formula 2 website.