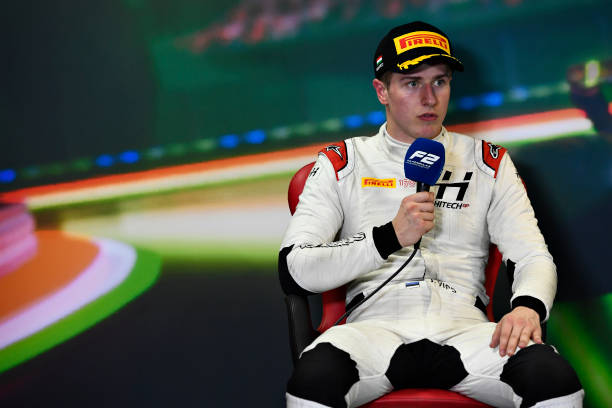 F2: Vips speaks about his “nightmare of a year”

It's been a tough season for the Estonian driver, who finished second in the Sprint Race at the Hungaroring

Juri Vips took his fourth podium in the Formula 2 Sprint Race in Hungary, but has yet to score a victory this season. FormulaNerds spoke to Vips about his season so far and how he feels about going so long without a win.

Vips’ “nightmare of a season”

The Hitech Grand Prix driver is one of four drivers so far to have taken multiple pole positions this season. But he’s also the only one of those drivers without a race win in 2022.

Vips laughed when FormulaNerds asked him how it feels not to have won yet, saying “Yeah, I can’t believe I haven’t won this year”.

Vips first scored a pole position this season at Imola, but spun into the gravel during the Feature Race and retired. He took pole position again at Baku, and lead the first stint comfortably. But he clipped the wall and took himself out yet again.

Failing to finish both races he’s started on pole has been a nightmare for Vips, who was the first driver to win two races in one round in 2021.

Whereas in his rookie season Vips finished sixth in the standings, he’s currently only ninth, with 75 points. In four out of the ten rounds so far, he’s failed to score any points at all.

It’s been a tough year for Vips off-track as well. He lost all his Red Bull backing after using a racial slur during a Twitch stream ahead of the round at Silverstone. Vips admitted it was a mistake and was retained by Hitech, but he received a lot of backlash for the incident. He also lost his position as a member of the Red Bull junior team and reserve driver for their Formula 1 team.

Vips started fifth in the Sprint Race at Hungary, but made his way up to second place on the first lap. From there, he tried to get closer and make a move on Doohan. But he couldn’t quite manage it, and had to settle for another race without a win.

FormulaNerds asked Vips if these results affect his mentality in races like today’s, where he fought with Doohan for the race win.

“I don’t think it affects it, to be honest. I was still calm today and I wasn’t going to do anything irrational. I think it’s more because I’ve thrown away two victories in Imola and Baku by crashing myself, that I’m a little more patient after that.

“Naturally I think you would be more impatient because I’ve had a nightmare of a year and I haven’t won yet. I think surprisingly I’ve just become more patient to be honest.”

Vips will line up sixth on the grid for Sunday’s Feature Race. How long will he have to be patient for until he scores his first win of 2022?