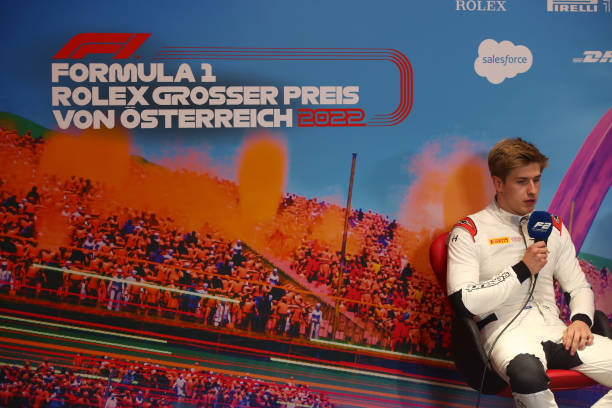 SPIELBERG, AUSTRIA - JULY 08: Second placed qualifier Juri Vips of Estonia and Hitech Grand Prix (8) talks in the press conference after qualifying ahead of Round 8:Spielberg of the Formula 2 Championship at Red Bull Ring on July 08, 2022 in Spielberg, Austria. (Photo by Joe Portlock - Formula 1/Formula Motorsport Limited via Getty Images)

F2: Vips admits “I did a huge mistake”

The F2 driver comments on his situation.

Following an incident where Juri Vips used a racial slur during a Twitch steam, the Formula 2 driver has admitted his mistake.

Vips spoke in the press conference after qualifying second in Austria, saying he accepts the anger directed towards him, and expressing his gratitude towards Hitech for keeping him on.

First, Vips was asked by RaceFans about his relationship with the Red Bull Formula 1 academy. Immediately after the incident, Red Bull released a statement saying that Vips had been suspended from all duties within the team.

Not long after, the team announced that he would no longer be a test or reserve driver for them. What they didn’t mention at the time, however, was his status as a Junior Driver. It was later revealed that Vips would retain his status as a junior driver for the team, although he showed up this weekend without any branding on his car or race suit.

When asked about his relationship, Vips told RaceFans “I would prefer not to comment. I’m sorry about that, I don’t want to be rude or anything, but I’d prefer not to.”

Where exactly Vips stands with Red Bull is still unknown. But Red Bull’s team principal has commented on their continued support for the driver.

“He is a young guy, a young kid, and we will be supporting him,” Horner told PA news agency. “Even though he has had his agreement terminated – from a mental health and educational perspective. Hopefully he will learn from it.”

After the Red Bull contract termination, Hitech Grand Prix announced that Vips would stay on as a driver for their team for the rest of the season.

Formula 2 released a statement following that announcement, saying Hitech’s decision was “surprising and not one we would have taken.”

In the press conference after Qualifying, Autosport asked Vips what his reaction to Formula 2’s statement was.

“I completely accept it,” said Vips. “I did a huge mistake, I offended a lot of people, and they’re completely right to say these things.”

I’m very humbled and thankful to Hitech to give me a second chance. But yeah, my main objective is obviously to continue with the season and give them good results, but mainly just to become a better person and to show everyone that I learned from this.”

Vips will be starting second in Sunday’s Feature Race in Austria, and will be looking for a good result for himself and the team following this situation.