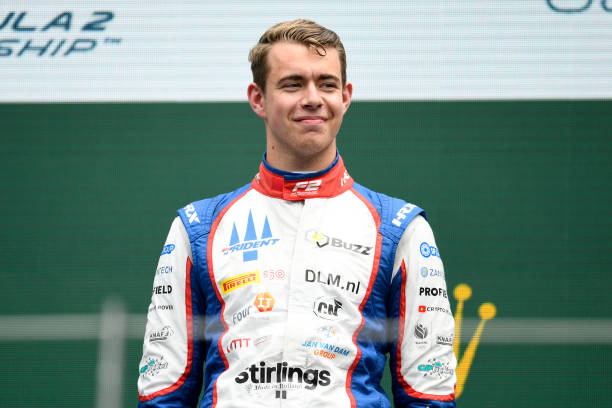 SPIELBERG, AUSTRIA - JULY 10: Race winner Richard Verschoor of Netherlands and Trident (20) celebrates on the podium during the Round 8:Spielberg Feature race of the Formula 2 Championship at Red Bull Ring on July 10, 2022 in Spielberg, Austria. (Photo by Rudy Carezzevoli - Formula 1/Formula Motorsport Limited via Getty Images)

Both Verschoor and Daruvala have received post-race penalties.

Verschoor made an impressive jump from eighth to first after a strategy gamble paid off for him and the Trident team. After winning the race, Verschoor pulled over to the side of the road with an unknown issue. He was taken to the podium celebrations by the Aston Martin medical car.

When Verschoor was asked about the issue he had after the final lap in the press conference after the race, he said “I’m praying it’s not fuel. I will cry if that’s the case. But let’s see.”

Following the race, all cars must provide a minimum of 0.8kg of fuel for the sample. If any car fails to provide at least that amount, they receive a disqualification from the race.

Trident was unable to pull the minimum amount of fuel from the car, and so Verschoor was investigated by the race stewards.

But the issue was fuel, and Verschoor was disqualified, with the decision stating that “During the after-race Scrutineering Car 20 was not able to provide a fuel sample of min. 0.8 kg.

“Only 31.3 grams of fuel could be extracted from the car. This is not in compliance with Art. 14.6 of the Technical Regulations.”

After a lucky, yet hard fought win for Verschoor and the team, this disqualification will be hard to take. Verschoor posted to Twitter following the announcement, saying “We deserved this. Good choice and amazing pace.”

The race win originally went to Daruvala, although he was under investigation for a breach of the Sporting Regulations.

The summons for Daruvala to see the stewards cited an “alleged breach of Article 22.3 of the FIA Formula 2 Sporting Regulations – competitors are not permitted to attempt to alter the grip of any part of the track surface.”

This summons was in reference to the team attempting to dry the track at Daruvala’s grid position using their cooling fans. Daruvala was given a 20 second time penalty, giving the win to Sargeant.

Enzo Fittipaldi is promoted to second, and Roberto Merhi will take third place. Merhi crossed the line in third, but was penalized for track limits and was demoted to fifth.

That means the race winner is the driver that started fourth, having inherited an extra 13 points and his second Feature Race win in two weeks.

It also puts Sargeant second in the standings, ahead of Theo Pourchaire.