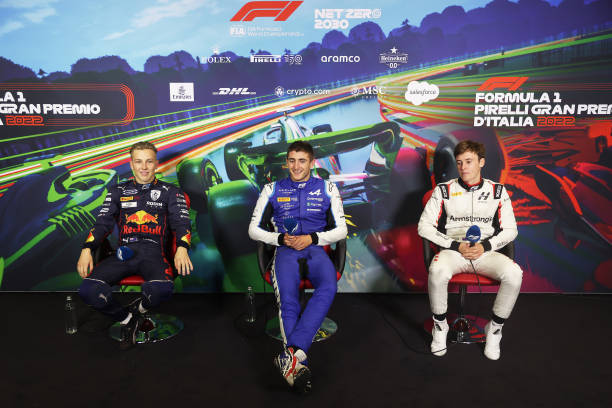 Formula 2 returns this weekend for the penultimate round of the season. The top three qualifiers of the Monza weekend while feeling good with the position they are in, aren’t fully comfortable as they know what can happen in a Formula 2 race.

Round 13 of the 2022 Formula 2 season is underway as the 22 drivers took to the grid yesterday for their second-to-last qualifying. The sun was low and the track rubbered up as the session went on with times getting faster and faster.

In the final few minutes, it was a battle to put it on pole between all championship contenders. Unfortunately, DAMs’ Ayumu Iwasa brought out the yellow flag after hitting the barriers and going into the gravel.

This meant that Felipe Drugovich, the championship leader, failed to put his MP Motorsport car on pole. He received a grid place penalty of five places for the next race.

At the chequered flag, the top three qualifiers were: Jack Doohan in P1, with Liam Lawson joining the Aussie on the front row, followed by Marcus Armstrong in P3.

All three drivers are in a great position for the Feature Race on Sunday, but today in the Sprint Race, they will be at the tail end of the top 10. FormulaNerds asked the three drivers how they feel with their positions on the grid for the races this weekend.

Doohan’s on pole but it isn’t all plain sailing

Jack Doohan was F2’s first pole-sitter in 2022. Since his maiden F2 pole in Bahrain, Doohan has started a race in P1 one other time, other than tomorrow, in Spain.

Speaking about starting on pole, Doohan said: “It’s good to start P1. It guarantees you kind of a good first lap in a way, a good first stint if you can keep it together.”

However, the Australian is aware that being on pole isn’t as easy one would think. Doohan said: “As soon as you get to the pitstops, you know hoping we all make it through Turn 1, getting through the pitstops is another thing as well. Then I’m sure people will be gambling a bit with strategy and seeing what they can do.”

He concluded saying that for him:

“I’m happy but obviously staying full focused on the race because I need the points and I want them and think we deserve them.”

Lawson lines up P2 on the grid on the front row with Doohan. The Kiwi said that “it’s a comfortable position to be in obviously going into Sunday.” However “it’s not a safe position for sure,” because overtakes “are available here.”

He continued saying: “These cars are very difficult to get off the line no matter where you’re starting, if you’re on pole or if you’re tenth […] it’s always a nerve-wracking start to try and get these things off the line cleanly.

“I think after the start that’s probably the first point where I’d start to think now I’m in a good position, we can race from here. Then you go to the pitstops which everything is to play for again.

“So I’d say no matter where you start, it’s never a completely comfortable feeling.”

Lawson has five podiums and three victories to his name this season, so the question will be whether he can have a good start and achieve another.

Armstrong’s hoping for a boring race

Armstrong was the Sprint Race winner last time out in Zandvoort. When speaking to FormulaNerds, the Hitech Grand Prix driver said:

“I was actually thinking before the quali session that if there was a race that you wanted to have a good quali, it was probably this one.”

Armstrong elaborated saying that for the Sprint, “you’d start towards the tail end of the top 10”, which “will most certainly be chaotic in some sense.” But for the Feature Race tomorrow, you’d be “in a good position”.

It would just come down to “strategy” and other aspects such as the pitstops Doohan and Lawson mentioned. Armstrong then said he’s aiming for:

For today’s race Armstrong starts seventh so it’ll be key for him, and Doohan and Lawson, to make it through the opening laps so they can work through the field.