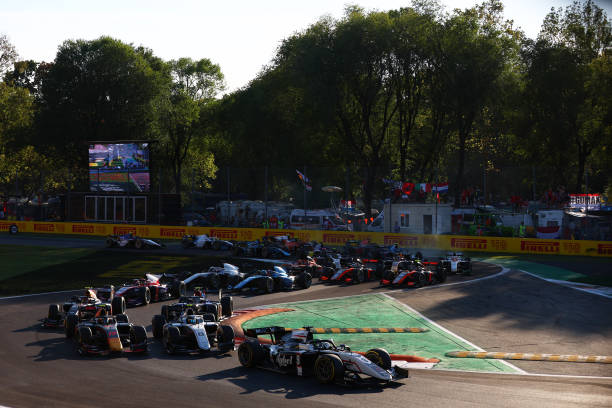 Who charged to victory in Italy?

Felipe Drugovich may have clinched the F2 title, but it was Juri Vips who won today’s sprint in Monza.

With the championship leader starting outside of the top 10, it was all to play for in the F2 sprint.

With the top 10 qualifiers reversed, rookie F2 racer Frederik Vesti started on pole position, joined on the front row by Logan Sargeant. Unfortunately for Sargeant, his reaction times were less than perfect today. As he fell down the order, Vips leapt forward to take second place.

There was more heartbreak further back as the F2 championship leader collided with Amaury Cordeel and dropped to the back of the pack. With damaged suspension, he made his way into the pits and retired from the sprint. With Theo Pourchaire back in P14, the Frenchman needed a top-six finish with the fastest lap to keep his F2 title hopes alive.

He reports his suspension is broken after getting tangled with Cordeel #ItalianGP #F2 pic.twitter.com/dO1o7sfqzP

The day was also over for Tatiana Calderon and Olli Caldwell. A dramatic incident brought out the safety car, neutralising the race.

Vesti controlled the restart well, but it was Vips who passed him to take the lead. The beginning of the second stint was similarly promising for Sargeant and Marcus Armstrong as they both improved.

Outside of the top 10, Pourchaire revealed his pace, moving up to P11.

Pourchaire continued to fight for the F2 title by setting the fastest lap despite being out of the points. Meanwhile, MP Motorsport’s day went from bad to worse as Clement Novalak sustained front wing damage as well as a puncture.

Back at the front of the pack, Vips established a lead of more than two seconds over Vesti. Prema Racing’s Jehan Daruvala improved to the last of the podium positions, followed by Sargeant and Ayumu Iwasa.

Just as the race was starting to calm down, Pourchaire found the gravel trap and fell all the way to the back of the pack. With just seven laps to go, it seemed that Drugovich had secured the title despite his earlier retirement.

Battles continued throughout the top ten as Iwasa continued to lose positions. By lap 16, he was being chased down by Jack Doohan for seventh place.

The race became more painful for the Japanese driver; Liam Lawson passed him for the final points scoring position, leaving him outside of the top eight.

Pourchaire managed to overtake Calan Williams for P16, but it was not enough to revive his F2 championship dreams.

Whilst Vesti attempted to close the gap to the race leader, Vips set the fastest lap, demonstrating his confidence. However, Vesti quickly snatched that achievement for himself as he remained in second place.

By Jasmine Hughes4 days ago

As it was confirmed that Drugovich had taken the F2 title, there was salt in the wound for Pourchaire as he was dealt a time penalty.