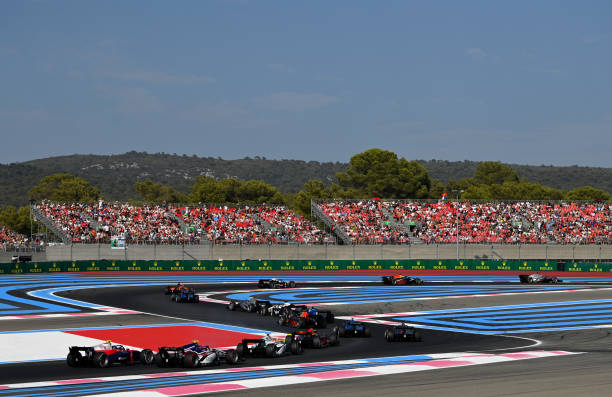 LE CASTELLET, FRANCE - JULY 23: A general view of the action during the Round 9:Le Castellet Sprint race of the Formula 2 Championship at Circuit Paul Ricard on July 23, 2022 in Le Castellet, France. (Photo by Dan Mullan/Getty Images)

Post race penalties for the front runners mixed up the race results.

With the last laps of the Sprint Race filled with drama, the stewards were in for a busy night as the summons rolled in.

The ‘home race hero’ has had his podium position removed after receiving a five-second penalty. This comes after the stewards determined that Pourchaire pushed Marcus Armstrong off the track at turn eleven. They found that Pourchaire “made an inside pass attempt at turn 11, was unable to hold the line, ran wide and forced Car 7 [Armstrong] off track.”

Pourchaire was reprieved from the usual ten-second penalty as the stewards determined his error was “relatively minor.”

In addition, Pourchaire also sees a penalty point added to his licence, his first of the season so far.

The penalty sees his podium position taken away, classifying P7. This, however, saw his championship rival Felipe Drugovich promoted on to the podium.

The Hitech driver also received a five-second time penalty for forcing Armstrong off the track at turn 15. In addition to this, Vips also saw a penalty point added to his licence, the third of the season.

On the same conditions as Pourchaire, Vips time penalty was reduced due to the incident being “relatively minor.”

The penalty saw the Estonian driver drop-down to P11 and out of the points.

Armstrong will be wanting to quickly forget today’s Sprint Race as he also received a five-second time penalty. The penalty came as Armstrong made a move on Jehan Daruvala to take P2; however, the Hitech driver was unable to materialise on it making contact with Daruvala, forcing him off the track at turn eight.

He also saw a penalty point added to his licence, taking his season total up to two.

Despite not finishing the Sprint Race, Fittipaldi sees himself with a five-place grid drop for tomorrow’s Feature Race.

By Catherine Micallef1 week ago

The penalty came after the Charouz driver made contact with Roberto Merhi after trying to pass him on the inside of turn eight.

After investigation, the stewards found that “Car 22 [Fittipaldi] did not achieve significant overlap by the turn-in point and accordingly had not earned the right to racing room.” The document went on to say that “Nevertheless Car 15 [Merhi] left him substantial room on the inside which Car 22 did not utilise.” Adding “Car 22 took a tight line into the corner which took him over the apex kerb, upsetting the car and causing it to oversteer into Car 15 on the exit.”

Campos has received a €1000 fine to be paid within the next 48 hours. The fine comes after a pit stop violation during Olli Caldwell’s pitstop.

The left rear wheel was not laid flat after removal, which could have caused a “potential safety issue”

Team manager Enrique Colomina appealed that “the driver [Caldwell] had not stopped on his marks and the pit crew had to adapt their position, contributing to the error.” Despite this, the stewards felt the fine was fitting to keep “consistent with prior breaches”