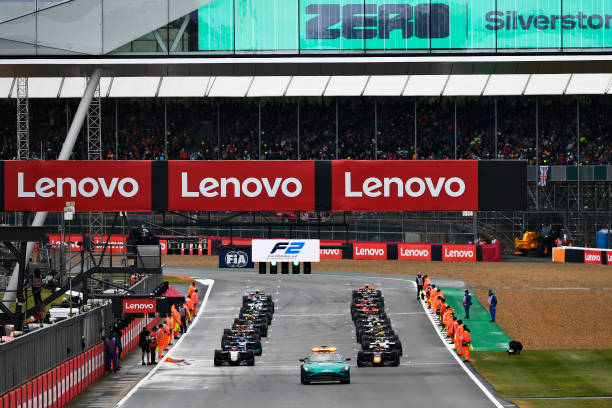 At a rain-soaked Silverstone, it was Jack Doohan who stormed to victory.

The traditional dreary British weather came out in full force for today’s Formula 2 drivers. Due to the hazardous conditions, the stewards settled on two formation laps before a rolling start.

The race got off to a tentative beginning as the spray clouded the racers’ views. Polesitter Jehan Daruvala appeared quietly confident as he led the pack through the mist.

This was the first wet race of the season, perhaps explaining why there were few changes in the order. However, this quickly changed as Frederik Vesti became embroiled in a battle with championship leader Felipe Drugovich. Whilst the Brazilian attempted to defend, Vesti forced his way through to move up to eighth position.

The Mercedes junior thrived in the first few laps as he set purple sector after purple sector, but it was Daruvala who was the fastest man on track. He built a gap of around one second to Enzo Fittipaldi while Juri Vips and Jack Doohan battled for third.

The Aussie quickly passed the Hitech driver, leaving Vips at the mercy of rookie Iyumu Iwasa. Whilst Liam Lawson improved to sixth place, you would not be blamed for missing the overtake for the lead.

It was not long before Daruvala’s heartache worsened, as Iwasa overtook him for the final podium position.

Jack Doohan rapidly snatched away Fittipaldi’s lead, creating a gap of 2.5 seconds. As this gap increased, the Charouz driver’s race continued to go downhill as Iwasa passed him.

Meanwhile, Vips headed into the pits after sustaining front wing damage. He changed his tyres and emerged in sixth place, with Vesti chasing him down.

As the track started to dry up, everyone focused on keeping their tyres in the ideal window. It was far too early to change to slicks, but the intermediates were beginning to lose performance.

Juri Vips faced more problems as he was slapped with a five-second penalty for exceeding track limits.

Halfway through, the top three remained Doohan, Iwasa, and Fittipaldi. Whilst several seconds separated them, Theo Pourchaire found himself just four-tenths behind the man in third place.

Everyone was watching the frontrunners, but at the back of the pack, tragedy struck Marino Sato as he was shown slowly pulling into the pitlane.

Pourchaire began to drop back as the condition of his tyres worsened. With five laps to go, the closest battle was between Marcus Armstrong, Dennis Hauger and Richard Verschoor for tenth place.

It looked like Daruvala would easily win this race in the opening laps, but it was Jack Doohan who built a gap of over four seconds to his nearest rival. Daruvala lingered in fifth place, driving what became a fairly lonely race. However, he was rapidly caught up by Drugovich, who once again improved.

In the meantime, a tense three-way battle emerged between Vesti, Daruvala and Logan Sargeant. And to the shock of many, Iwasa suddenly closed the gap to the race leader down to just two seconds. After setting the fastest laptime, it all came down to the final lap.

The two drivers got closer and closer as Doohan attempted to break the tow. Despite Iwasa’s best efforts, the Aussie held onto victory.