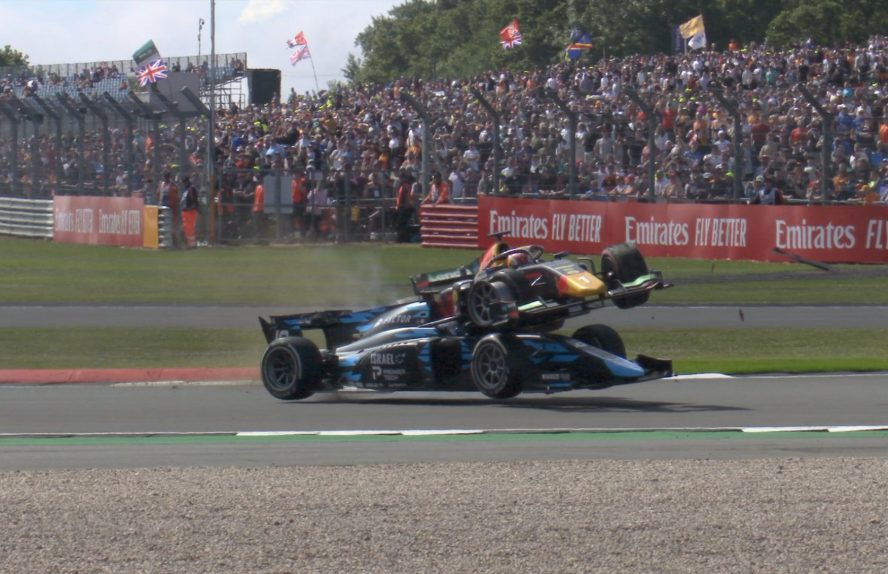 After taking a dominant pole position on Friday, Sargeant had a perfect start to retain his lead going into the first corner. Theo Pourchaire was the main charger, coming from fourth to second at the start. Jack Doohan, on the other hand, dropped five places, from seventh to 12th.

It was DAMS driver Roy Nissany who made contact with Dennis Hauger on the first lap. Hauger went over the sausage kerbs, which launched him into the air and onto the top of Nissany. The two went into the gravel, but fortunately were not injured.

Further back, the Hitechs of Juri Vips and Marcus Armstrong fought for eighth place, as Charouz driver David Beckmann received a 10s time penalty for a starting grid infringement. Vips initially kept the place, but Armstrong got past him not long after.

DRS was enabled on Lap 8, by which point Sargeant had built up a healthy gap to Pourchaire with about 1.7s between them. The American driver continued to pull away from the rest of the pack.

Pit stops began on Lap 10, with Frederik Vesti, Enzo Fittipaldi, and Armstrong all pitting from sixth, seventh, and eighth. Lawson and Ayumu Iwasa, who had been running third and fourth, pit the following lap.

The leaders, Sargeant and Pourchaire, came into the pits on lap 12, putting Felipe Drugovich in the lead ahead of Vips and Jehan Daruvala.

From here the race settled down as the drivers in the midfield waited for the drivers out front to come in. Drivers also began to push the limits of the car and the track, with Drugovich, Vesti, and Armstrong all receiving the black and white flag for exceeding track limits.

Daruvala managed to get within a second of Vips by Lap 23, at which point Vips came into the pits. A small issue in the pits saw him come back out in 12th place behind his teammate. Daruvala pit the following lap, giving the race lead to Doohan.

Doohan and Hughes were the final two to pit, doing so on Lap 25. From there, Sargeant regained the lead of the race, followed by a closing in Pourchaire.

With four laps to go Pourchaire was within DRS range of Sargeant, and behind them Vesti closed up on Lawson in third. Drugovich joined that fight in the closing laps as well.

But the Carlin cars of Sargeant and Lawson managed to widen their gaps in the final moments, with Sargeant crossing the line to take his first Feature Race win in Formula 2.

Lawson finished third behind Pourchaire, but Drugovich nabbed fourth from Vesti at the very end. Behind those five drivers were Vips, Daruvala, Armstrong, Doohan, and Hughes.

With Sargeant taking the points for fastest lap in a flawless weekend for the rookie, he’s now up to third in the standings behind Drugovich and Pourchaire.