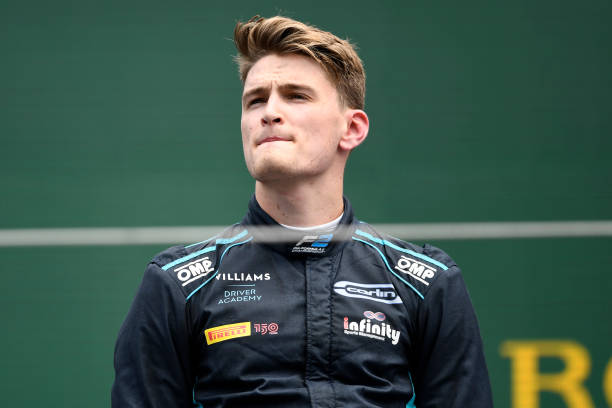 SPIELBERG, AUSTRIA - JULY 10: Third placed Logan Sargeant of United States and Carlin (6) celebrates on the podium during the Round 8:Spielberg Feature race of the Formula 2 Championship at Red Bull Ring on July 10, 2022 in Spielberg, Austria. (Photo by Rudy Carezzevoli - Formula 1/Formula Motorsport Limited via Getty Images)

F2: Sargeant’s lucky win puts him second in the championship

The American driver has been on a championship charge the past couple of weeks.

In the Feature Race at Austria, Carlin’s Logan Sargeant crossed the line in fourth place and yet eventually was named the winner.

After a slew of penalties for other drivers on the track, Sargeant inherited his second consecutive Feature Race win. He also passed Theo Pourchaire for second place in the overall standings.

Making the best of bad strategy

Sargeant started third in the Feature Race, having qualified behind Frederik Vesti and Juri Vips on Friday. Starting on the wet tyres with the rest of the frontrunners in drying conditions, he lost two positions at the start.

After an intense overtake around the outside of Jack Doohan in the first lap, Sargeant was back up to fourth, but the drivers starting on the slick tyres were slowly gaining an advantage.

By lap 6 it was obvious which strategy call had been the right one. Richard Verschoor, who had started eighth, took the lead of the race on slick tyres. Sargeant, on the other hand, dropped from fourth to 14th in less than one lap.

In the press conference after the race, Sargeant said he knew that they had made the wrong call on the tyres right away.

“On the formation lap, I knew it was pretty much a given that we were going to be in reverse. I was optimistic that maybe we could hold on until the pit window.”

On lap 8 he came into the pits, putting on the slick tyres and coming out in 14th place. From there, he spent the next nine laps picking off the drivers in front of him. He was fast enough to come out in fourth again by lap 17.

Sargeant told Autosport after the race that he wasn’t taking his tyres into account during that stint on fresh tyres. His only goal was trying to get back up the field.

“I was flat out, I wasn’t worried about tyre deg, and they were all coming out on cold tyres and I just kept picking them off one by one.”

Keeping out of trouble

Sitting in fourth for the rest of the race, it was just a matter of hanging onto the tyres and staying out of trouble for the American.

The main problem that most drivers faced throughout the weekend was track limits, something Sargeant didn’t seem to struggle with.

“From my side, I’m quite happy with what I did in terms of track limits over the weekend,” he told FormulaNerds. “Obviously it becomes a struggle when the tyres are degging, it’s quite easy to slip over the line, so it’s just about staying focused and making sure that you don’t go over more than four times.”

Sargeant managed to avoid any penalties for track limits throughout the weekend. The driver directly in front of him in the Feature Race, Roberto Merhi, was not as successful. Merhi picked up a five-second time penalty towards the end of the race, promoting Sargeant to third afterwards.

But that penalty was just the beginning of Sargeant’s luck. Not long after the Feature Race had ended, Verschoor was disqualified for failing to provide a sufficient fuel sample. He lost the win, and Sargeant was promoted to second place.

The next driver to fall was Jehan Daruvala. He was proclaimed the race winner for less than an hour before he was awarded a 20-second penalty for his team attempting to dry out his grid spot before the race.

This series of events, while unfortunate for Verschoor and Daruvala, gave Sargeant the Feature Race win, and a total of 13 extra points from his original finishing position of fourth place.

If Sargeant had remained in fourth place after the Feature Race, he would still be third in the overall standings, 12 points behind Pourchaire. But now he’s second, and the next driver in his sights is the championship leader Felipe Drugovich.

He’s also comfortably in the lead of the rookie championship, a whole 48 points ahead of Prema’s Dennis Hauger.

Despite now being the closest rival to Drugovich, Sargeant maintains he isn’t focused on the title battle.

“I’m just giving it 100% every time I go out there,” he said after the Feature Race. “I think today was a good example that, we could have called it early on in that race that it was over and weren’t going to come back through but we just never gave up. And it’s what I’m going to keep doing.”

There’s still a hefty gap for Sargeant to make up to Drugovich, with 39 points between the two. But the American driver has proven to be on the pace more consistently than anyone else the past couple of weeks. Plus, there’s another double header ahead of him to maintain that momentum.