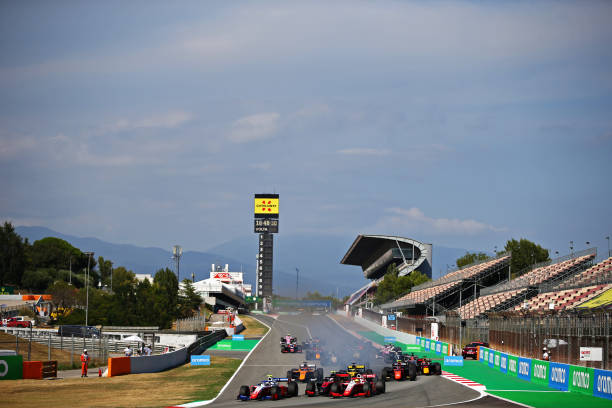 BARCELONA, SPAIN - AUGUST 15: Robert Shwartzman of Russia and Prema Racing (21), Callum Ilott of Great Britain and UNI-Virtuosi Racing (4) and Mick Schumacher of Germany and Prema Racing (20) battle for position at the start during the feature race of the Formula 2 Championship at Circuit de Barcelona-Catalunya on August 15, 2020 in Barcelona, Spain. (Photo by Dan Istitene - Formula 1/Formula 1 via Getty Images)

F2 returns to Spain – the challenge of Barcelona

Barcelona is one of the most challenging tracks the F2 calendar has.

Formula 2 returns to the Circuit de Barcelona-Catalunya for the fourth round of the season. The Barcelona circuit is one of the most intimidating tracks on the calendar but the one where drivers have a lot of experience.

Being one of the most used circuits in motorsport, the Circuit de Barcelona-Catalunya is perfect to challenge the car and the skills of the drivers. As for this weekend is back in Formula 2 after a one-year hiatus.

The challenging circuit was built in 1991 and since its inauguration, great drivers have raced there. However, it is not plain-sailing as some of them continue to make mistakes on the track.

As for Formula 2, this category has been using the circuit since 2017 for the Spanish Grand Prix. The track consists of 4,675 km of distance and 16 curves. The clockwise track has a perfect, long straight for full throttle.

Fact: Till today the record for the fastest lap is held by Michael Schumacher (in 2006 when he was racing for Ferrari) with a time of 1:14.637.

Between the aerodynamics, the curves, and the strategy to centre on the tyres, the circuit provides a real challenge. The high temperatures that can be experienced can destroy tyres at a monstrous speed.

The teams must take that all into consideration as well as the downforce. The mixture of medium and high-speed corners only intensifies the intense battle.

Is important to always drive with caution and not spin out of the track as it can be certain you could end at the wall and yellow flag with a safety car.

For the F2 competition, 26 laps are run for the sprint race and 37 laps for the feature race.

Since the entry of the Barcelona circuit to the Formula 2 calendar (2017), ART Grand Prix and MP Motorsport have taken full control of the track and demonstrated that it is not an easy challenge.

Last season in 2021, the circuit wasn’t part of the Formula 2 calendar, nor were the tests taking part in it. These were changed to the Sakhir circuit.

But looking back, the 2020 season was quite impressive. The start saw Robert Schwartzman and Mick Schumacher battling for the race lead. Two safety cars then threw a curveball into the middle of the race.

The first safety car for Giuliano Alesi as he spins out of the track on lap 25. As for the second safety car, Roy Nissany into the wall in sector 1 as Matsushita positioned in the first place, on lap 32.

The last lap of the race saw Nobuharu Matsushita (MP Motorsport) and Robert Schwartzman (Prema Racing) battling for the win and a victory for the Japanese. At the press conference, Matsushita was really happy and said:

“I didn’t expect to win the Feature Race, but the safety car came at the perfect time,” he explained. “It was not the plan, but the situation changed, and I had a good pace.”

In a few days, the Formula 2 action will be back at the Barcelona circuit with the Spanish GP and with some changes in the teams and some on the circuit.

“For Barcelona it would not be an issue because at least we have done  one month ago, even less, 3 days of testing there with both of our drivers, we have the possibility to do a lot of laps so I think to have been racing there last year or not is not change anything, I think it would be the first race of the season that we will have our two drivers really prepared for the race weekend.”

At the moment Théo Pourchaire  (ART Grand Prix) is the leader with 52 points and Felipe Drugovich follows him with 50 points. With a great history, the Brazilian (Drugovich) will surely give something to talk about and a battle to the challenge of achieving victory in this circuit.

You can’t miss the Sprint Race this Saturday 20th and the Feature Race on Sunday 21st.