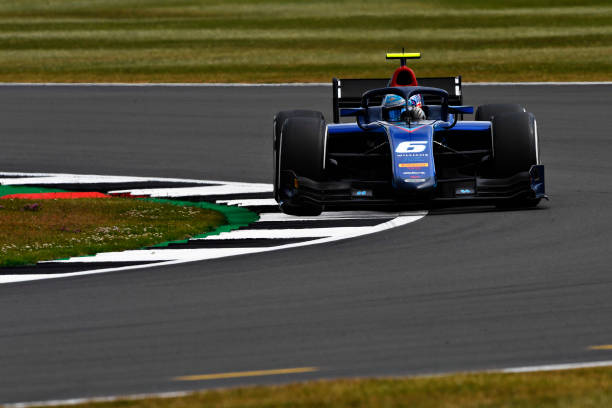 NORTHAMPTON, ENGLAND - JULY 01: Logan Sargeant of United States and Carlin (6) drives on track during practice ahead of Round 7:Silverstone of the Formula 2 Championship at Silverstone on July 01, 2022 in Northampton, England. (Photo by Rudy Carezzevoli - Formula 1/Formula Motorsport Limited via Getty Images)

Logan Sargeant was the man to beat in Formula 2’s qualifying session at Silverstone. He took his maiden pole position in the category today, ahead of ART’s Frederik Vesti and MP Motorsport’s Felipe Drugovich.

Sargeant had been the pace-setter in the practice session earlier today, setting a 1:40.902. But the Charouz cars of Enzo Fittipaldi and Cem Bolukbasi were the first out on track, and the first to set the benchmark.

For the first minutes of the session provisional pole was passed around quickly, from Jake Hughes to Vesti, to Roy Nissany, to Felipe Drugovich, then to Jack Doohan.

Vesti was the first to take back the top spot, setting a 1:39.611 with about 20 minutes to go. Drugovich started a fast lap, but had a moment where he almost went off, and had to settle for third place for the time being.

Juri Vips, fresh off being dropped by the Red Bull junior programme, was the next driver to steal first place. But then it was Sargeant who set the first time within the 1:38s range. He topped Vips’ time by 0.425, and grabbed provisional pole.

With half the session done, the drivers made their way back into the pits. Jehan Daruvala was the first driver to improve when they went back out, popping up to second place and less than 0.2s behind Sargeant.

But there was no stopping the American Carlin driver, who continued to set purple sector after purple sector. He put in a 1:38.432 to improve on his own pole time and solidify his gap to second place.

His teammate, Liam Lawson, put the other Carlin car in second place, but only for a moment until he was replaced by Vesti.

David Beckmann, filling in for VAR’s Amaury Cordeel this weekend, became the only casualty of the session. After an incident and a yellow flag, he got out of his car and his session was over.

Drugovich spun in the final minutes, but still had enough pace to finish third overall. While no one else was able to improve, Sargeant officially claimed his maiden pole position in Formula 2.

Behind him was Vesti, and then Drugovich. Theo Pourchaire and Lawson rounded out the top five. Then, it was Ayumu Iwasa, Doohan, Vips, and Fittipaldi, with Daruvala claiming tenth place and securing reverse grid pole for the Sprint Race.