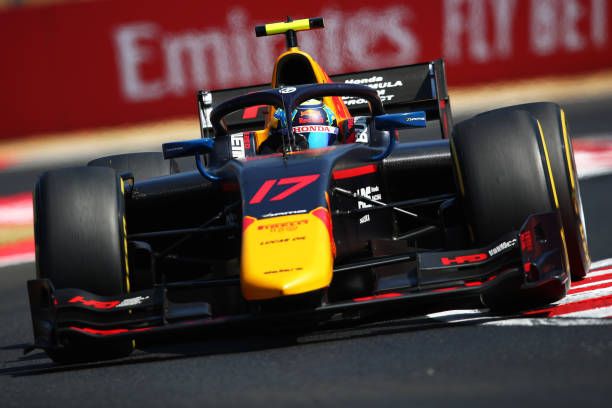 BUDAPEST, HUNGARY - JULY 29: Ayumu Iwasa of Japan and DAMS (17) drives on track during practice ahead of Round 10:Budapest of the Formula 2 Championship at Hungaroring on July 29, 2022 in Budapest, Hungary. (Photo by Joe Portlock - Formula 1/Formula Motorsport Limited via Getty Images)

Ayumu Iwasa took pole position in an exciting qualifying session for Formula 2 at the Hungaroring.

The Hitech cars of Marcus Armstrong and Juri Vips were the first out on track at the beginning of the session. Armstrong was the first to set a representative lap time, a 1:29.288, while UNI Virtuosi’s Jack Doohan claimed second place.

With 23 minutes still to go, ART Grand Prix climbed to the top of the timing sheets, with Frederik Vesti and Theo Pourchaire claiming first and second respectively. The two teammates proceeded to hold the top two slots for a while. with Doohan slotting in third, and Vips and Armstrong behind them.

Then it was the championship leader Felipe Drugovich who made a charge, putting himself second overall and in between the ART cars. Logan Sargeant was on a fast lap when he exceeded track limits at Turn 4, and decided to abandon the rest of the lap.

With half of the session gone, drivers started to come into the pits to get fresh tyres and regroup. As they were coming in Iwasa got up to ninth place. At this point Vesti still held provisional pole, with Drugovich, Pourchaire, Vips, and Armstrong staying strong in the top five.

While most of the drivers were in the pits, a few drivers stayed out to set a lap time in clean air. One of those drivers was Olli Caldwell, who managed to set a 1:28.803 with no traffic and claim provisional pole by 0.047s.

Around 12 minutes to go, the drivers started to come back on track for their final runs. Armstrong was one of the first out yet again, and was the driver to retake the number one spot. Sargeant right behind him took second place.

The minutes ticked down, with Armstrong still on pole but unable to improve on his second run. Doohan meanwhile was the driver to claim tenth place and reverse grid pole.

Armstrong and Sargeant might have been unable to improve, but Vips went faster with less than five minutes to go and took fourth place. Drugovich moved up to second, displacing Sargeant.

Almost all the drivers were slowing down and not setting faster laps than they had before. Among the few to improve was Iwasa, who set a 1:27.930 and put his DAMS car on pole by a whole three tenths over Armstrong.

And so the Japanese rookie claimed his first ever pole position in Formula 2, ahead of Armstrong and Drugovich. Pourchaire took fourth, with Sargeant, Vips, Hauger, and Fittipaldi behind him. Doohan will start tenth on Sunday, but will take reverse grid pole for tomorrow’s Sprint Race.