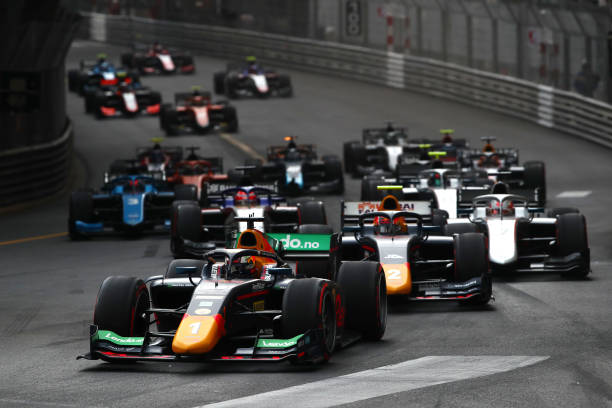 MONTE-CARLO, MONACO - MAY 28: Dennis Hauger of Norway and Prema Racing (1) leads Jehan Daruvala of India and Prema Racing (2) and the rest of the field at the start during the Round 5:Monte Carlo Sprint race of the Formula 2 Championship at Circuit de Monaco on May 28, 2022 in Monte-Carlo, Monaco. (Photo by Joe Portlock - Formula 1/Formula Motorsport Limited via Getty Images)

Unfortunately for Hughes, he was unable to get off the line at the start, and was swallowed by the rest of the pack as second-placed Hauger took the lead.

Further down, the championship leader Felipe Drugovich ran into trouble and fell to the back with a puncture. He pit at the end of lap 1, and with a little rain in the air made the choice to switch to wet tyres.

It was a gamble that didn’t pay off for Drugovich, who came back to the pits several laps later and incurred a penalty for speeding in the pit lane. He switched to the supersoft tyres and went back out, now at the very back of the grid.

In a confusing turn of events, Drugovich had to pit again for a new set of tyres, after the team realized the regulations prevented him from switching out of the wets after he had put them on. In the chaos, he temporarily retired from the race.

Out at the front, however, everything remained calm. Hauger had built up enough of a gap to keep Daruvala out of his DRS, and Armstrong, Fittipaldi, and Vips behind all maintained their positions from the start.

Then, on lap 10, Clement Novalak came together with Ayumu Iwasa, and Novalak was sent into the wall. Iwasa received a 10 second time penalty for this collision, and the Safety Car was deployed to recover Novalak’s car.

At this point, Drugovich came back into the race, now a full six laps down on everyone else in the field. He promptly received yet another penalty for speeding in the pit lane, making his bad day somehow even worse. As he wasn’t allowed to switch from the wet tyre, he had no chance of making any sort of improvement on the completely dry track.

The Safety Car was called back in on lap 14, and the field remained in the same positions for the restart. Hughes, from the back, was up to 19th after Drugovich and Novalak’s misfortune, and was holding the fastest lap.

On lap 19 MP Motorsport finally put Drugovich out of his misery and retired his car once and for all. He’ll be hoping for a much better day tomorrow, when he starts on pole for the Feature Race.

On lap 23, Hauger in the Prema stole the fastest lap from Hughes. Having now pulled an impressive five-second gap to Daruvala behind, the Norwegian rookie was eager for his first Formula 2 win.

Marino Sato and Olli Caldwell had a small incident in the midfield, but the stewards ruled it a racing incident and nothing more came of it. In ninth place, Roy Nissany incurred some front wing damage and became vulnerable to Carlin’s Logan Sargeant behind him.

On lap 27, Theo Pourchaire became the first driver to break into the 1:22s, setting a fastest lap time of 1:22.983. Pourchaire was holding sixth place, and although Armstrong went for the fastest lap towards the end he was unable to snatch it away.

Stilll holding an impressive lead from his teammate, Hauger crossed the line after lap 30 to take his maiden victory in Formula 2 at Monaco. Daruvala came in second, giving Prema their first 1-2 of the season. Armstrong completed the podium.

The rest of the point scorers for today’s Sprint Race were Enzo Fittipaldi, Juri Vips, Pourchaire, Jack Doohan, and Liam Lawson. Formula 2 will be back racing on Sunday for the Feature Race.