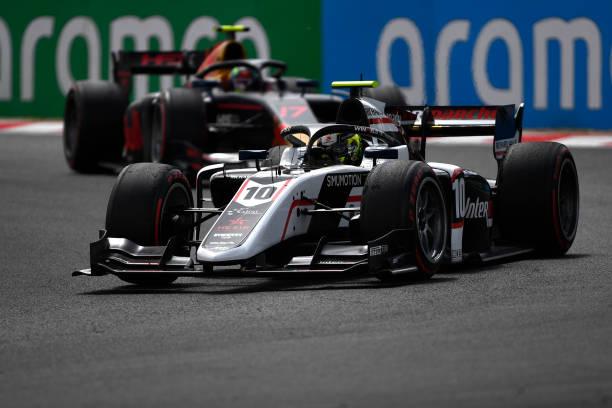 BUDAPEST, HUNGARY - JULY 31: Theo Pourchaire of France and ART Grand Prix (10) leads Ayumu Iwasa of Japan and DAMS (17) during the Round 10:Budapest Feature race of the Formula 2 Championship at Hungaroring on July 31, 2022 in Budapest, Hungary. (Photo by Rudy Carezzevoli - Formula 1/Formula Motorsport Limited via Getty Images)

Théo Pourchaire took his third win of the year in Formula 2’s Feature Race at the Hungaroring.

After Qualifying on Friday, it was DAMS’ Ayumu Iwasa who was on pole position for today’s race. The Red Bull Junior won his first race this season last time out at Paul Ricard. All eyes were on him on whether he could translate pole to another race victory.

Felipe Drugovich starts on the second row with Théo Pourchaire in P4. The two will be looking to score as many points as possible to help their championship campaigns. Logan Sargeant, who unfortunately retired from the Sprint Race, is starting behind Drugovich on the grid in P5.

As the lights went out, the fight was on at the Hungaroring.

Armstrong had a great start as he went straight up into the lead. Drugovich locked up going into Turn 1, allowing Pourchaire to slip past both him and Iwasa, getting up into P2.

The soft tyre switched on earlier than those on the mediums. Sargeant, who’s looking to get his season back on track, started on the mediums but fell back to P10 in initial laps.

Jack Doohan, who won the Sprint Race, suffered a problem and saw himself drop down to the bottom of the grid. The Australian was at one point 45 seconds behind the back of the pack. On lap four, Doohan headed into the pits and retired from the race.

Enzo Fittipaldi was sporting the soft-compound tyres. These allowed him to overtake Frederick Vesti on the mediums, getting into fifth position.

A DRS train saw six drivers in a procession, with Richard Verschoor leading. Behind him was Cem Bolukbasi, who made some great overtakes to get just outside the points.

Verschoor battled with Dennis Hauger for the last podium position. Both were yet to pit, but it was the Trident driver who took P3 after overtaking Hauger.

Battle for the lead

The battle for the podium positions was on. Drugovich, on lap eight, decided to go early into the pits. He switched from the softs to the medium-compound tyres, playing the long game. He came out of the pits in P19, 15 seconds from the rear of the field.

Iwasa and Pourchaire fought for P2 with the Frenchman in the lead. The DAMS driver was suffering from some graining on the front left, prompting his first pitstop of the race.

The top two also pitted, meaning Fittipaldi then had the race lead. As the three came out of the pits, it was Pourchaire who came out first. Armstrong saw himself behind Pourchaire and Iwasa, but ahead of Drugovich.

Fittipaldi, who was suffering some serious degradation on his front left tyre, braved it by staying out for an extra lap. He then pitted on lap 11. Coming out of the pits, Fittipaldi came out of the pits with track position ahead of Iwasa, Drugovich and Armstrong.

Lap 18 saw Pourchaire and Fittipaldi begin to work their way through the rest of the field as they overtook Amaury Cordeel. Roy Nissany’s lock-up allowed Pourchaire through so that the championship contender could then pick his way through the top six.

Armstrong and Drugovich battled with each other as the Kiwi got ahead of the championship leader. He then began to close the gap to Iwasa, putting pressure on the race’s pole sitter.

Vesti was leading the race after the initial frontrunners pitted. He had yet to pit, much like the nine other drivers behind him. The top 10 were all on the medium tyres, but degradation soon became an issue.

Vesti’s tyres had bits of rubber flying off as he ran the alternate strategy. Sargeant, who had more pace than his teammate and Hauger, was also struggling slightly.

After Liam Lawson overtook Hauger to get into P4, it was Sargeant on the hunt for the Norwegian driver. The American sailed past Hauger, trying to close the gap to Lawson.

Lawson and Verschoor battled for third position, with some very close calls as the two came down the hill. Verschoor remained ahead but soon came into the pits.

Vesti and Juri Vips pitted, putting Lawson in the lead just ahead of Sargeant. The former two locked up coming out of the pits, as they tried to get temperature into the tyres. Vesti, unfortunately, suffered a flat spot on his tyre.

Carlin’s Sargeant soon boxed after, leaving his teammate to be the only driver ahead of Pourchaire. After Lawson pitted, the top three were Pourchaire, Fittipaldi and Iwasa.

The fight for points positions was on as Cordeel was putting pressure on Vips. Vesti in P6 was pushing on Drugovich, who despite leading the championship, hadn’t won a race since Monaco. Tyre strategy proved vital after Vesti and Vips got ahead of Drugovich.

With two laps to go, Vesti dispatched Armstrong, getting ahead into P4. A few places back, Lawson overtook Drugovich, sandwiching the Brazilian in a Carlin sandwich.

Pourchaire was leading the race but on the final lap, Fittipaldi was putting pressure on the Frenchman. However, Fittipaldi began to drop back. Commentators suggested he could have started to lose power.

Pourchaire held onto the lead, achieving a race victory. This race win at the Hungaroring is his third win this season. Fittipaldi held on to P2, followed by Iwasa rounding off the podium.

Frederick Vesti, towards the beginning of the race, was under investigation for forcing another driver off the track. As a result, he received a five second time penalty.

Clement Novalak, who was fighting for position, also received a penalty. He had a five-second time penalty for forcing another driver off track and gaining an advantage.