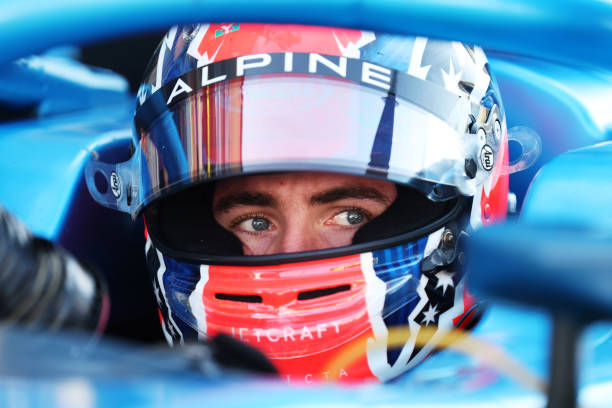 MONZA, ITALY - SEPTEMBER 09: Jack Doohan of Australia and Virtuosi Racing (3) prepares to drive during practice ahead of Round 13:Monza of the Formula 2 Championship at Autodromo Nazionale Monza on September 09, 2022 in Monza, Italy. (Photo by Alex Pantling - Formula 1/Formula Motorsport Limited via Getty Images)

Can Drugovich clinch the title this weekend?

The temple of speed holds host to round 13 of the Formula 2 championship.

Clement Novalak led the field out onto the circuit.

Liam Lawson set the first benchmark time of the session with a 1:32.959. Enzo Fittipaldi claimed P2 with a 1:33.302 while championship leader Felipe Drugovich took the final podium position with a 1:33.222.

As the grid went for the second push lap the order quickly was overturned. Juri Vips topped the times with a 1:32.018 after a mega lap following a tow from Luca Ghiotto. Logan Sargeant slotted into P2 with a 1:32.494 while Theo Pourchaire sat in P3 with a 1:32.597.

Jack Doohan displaced Vips with just over 16 minutes remaining, as he took the top spot with a 1:31.965.

After sitting in P10 for a short while Drugovich improved up to P4 with a 1:32.588 going into the break.

With just over 14 minutes on the clock, the grid peeled into the pits.

As racing resumed with eight minutes on the clock the grid filtered out onto the grid.

With the flying laps coming in Ayumu Iwasa took the top spot with a 1:31.920. However, with the track ever improving a flurry of lap times came in. Jack Doohan reclaimed his provisional pole position with a 1:31.641.

As the chequered flag was waved the order was unable to change as Iwasa hit the barriers at the Parabolica bringing out the yellow flags.

This handed provisional pole to Jack Doohan who will see Liam Lawson line up next to him on Sunday for the Feature Race.

With Drugovich qualifying in P4, he has made it very likely that he will seal the championship this weekend. Theo Pourchaire only added to his advantage after a poor qualifying session left him in P14. This means that he marginally missed out on the opportunity to take the reverse grid pole in tomorrow’s Sprint Race. Will Pourchaire be able to fight through the field or will Drugovich take home the title?