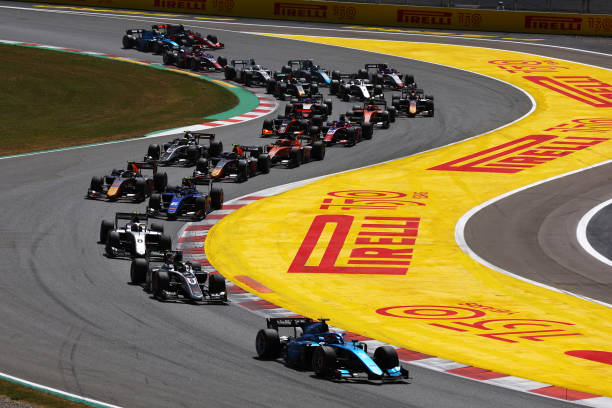 Drugovich was joined by maiden podium finishers Doohan and Vesti

Polesitter Jack Doohan got a good start off the line, cleanly establishing an early lead. Behind him, Hitech GP’s Juri Vips lost a position to Mercedes junior driver Frederik Vesti – disappointing, but not as tragic as his incident in Saturday’s sprint race.

All eyes were on Jehan Daruvala, who was on the alternative strategy of using hard tyres. It would have been fascinating to see how this played out, but his race ended just three laps in.

It was initially believed that an incident with fellow Red Bull junior Ayumu Iwasa forced a retirement. However, replays revealed that Daruvala’s engine simply cut out – Iwasa did make contact, but only to avoid the Prema racer’s halting car.

For the second time this weekend, the safety car came out.

After changing his front wing in the pits, Iwasa emerged in 18th.

The safety car period came to an end on lap six of 37, just as it was announced that Dennis Hauger received a five-second time penalty.

Whilst there was potential for a feisty restart, Alpine junior Doohan kept an easy lead, extending the gap to Vesti by nine-tenths.

It looked like Drugovich had the chance to move up to fourth by passing Logan Sargeant, but he failed to make the move.

With few overtakes occurring on track, the focus moved to the pitstops.

It was no secret that Vips wanted to get rid of his soft tyres sooner rather than later. His luck seems to be neverending – after being the first driver to pit, he suffered a slow stop.

As a result, the Estonian driver emerged all the way down in 19th, around 43 seconds behind the leader.

10 laps in, a multitude of drivers elected to change their tyres, promoting Drugovich to third.

Meanwhile, frontrunner Doohan stayed out with the aim of pushing his soft tyres as far as possible.

When he eventually changed his tyres, Drugovich moved forward to lead as the Alpine academy driver came out in ninth position.

Crucially, he was ahead of Vesti, who had been in second place earlier in the race. However, Drugovich appeared to be building a significant gap of over 29 seconds to the polesitter.

After Dennis Hauger had a trip through the gravel, Drugovich finally pitted on lap 17. A hesitant stop saw him emerge in ninth, which looked like net third place.

Doohan’s fight to the front

With the Australian in sixth, all eyes were on him to move through the traffic and retake the lead.

Barcelona is not exactly known for its overtaking opportunities, but the podium contenders did not prove to be an issue.

Vesti crucially failed to pass Hauger. Drugovich and Doohan managed to improve a place, ending up in fifth and seventh respectively on lap 20.

Just 2.640 seconds separated the two. However, a pitlane infringement by Drugovich will not be investigated until after the race, casting uncertainty on his finishing position.

With the frontrunners going into the pits, Doohan inherited the lead once again, pursued by Drugovich.

The gap narrowed to just a couple of tenths, but the Brazilian driver’s fresher tyres proved decisive in the battle.

After starting in tenth, he carried out a clean overtake down the main straight and built a lead of 1.5 seconds.

Depending on the result of the pitlane investigation – the details of which seem unclear – this could be critical for Drugovich’s championship fight.

It looks like no matter where he starts, Drugovich will find a way to dominate. His margin over Doohan continued to grow as rival Pourchaire fought to hold on to fifth.

Credit is owed to Liam Lawson, who recovered to sixth place after his worst ever qualifying.

Back at the front, 10 seconds separated Drugovich from Vesti in third, making the podium finishers clear.

Meanwhile, MP Motorsport’s Clement Novalak charged through the field. He passed both Lawson and Pourchaire, moving up to fifth. With his teammate leading the race, this will be an unforgettable day for the team.