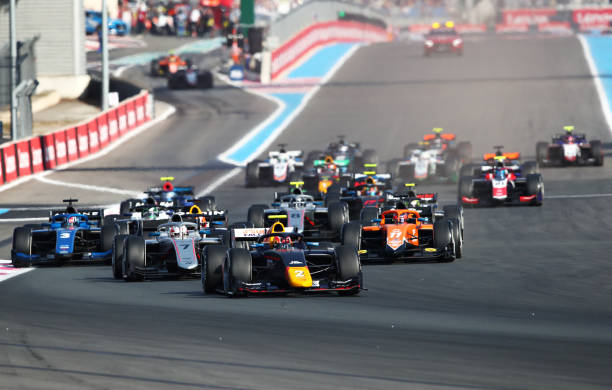 LE CASTELLET, FRANCE - JULY 23: Jehan Daruvala of India and Prema Racing (2) leads the field into turn one at the start during the Round 9:Le Castellet Sprint race of the Formula 2 Championship at Circuit Paul Ricard on July 23, 2022 in Le Castellet, France. (Photo by Joe Portlock - Formula 1/Formula Motorsport Limited via Getty Images)

The Red Bull backed driver, Liam Lawson was the man to beat in today’s Sprint Race.

Before the start of the Sprint Race, Roy Nissany sees himself at the back of the grid despite qualifying P20. The four-place grid drop comes after he received a one-place grid drop for hindering Olli Caldwell. This added to the three-place drop he had already received for re-joining the track in an unsafe manner.

Three cars failed to make the formation lap as Richard Verschoor, Enzo Fittipaldi and Clement Novalak stalled on the grid. As a result, the three drivers were forced to start from the pitlane.

As the lights go out Jehan Daruvala maintains his lead while Marcus Armstrong takes P2 from Liam Lawson. As Drugovich battles with Lawson for P3 Theo Pourchaire passes to claim P4.

After stalling on the grid, Richard Verschoor retired from the session.

Moving into lap four, Armstrong and Lawson battle for P2 as Lawson gets the upper hand. In the meantime, Pourchaire was catching while Daruvala extended his lead at the front of the field.

Moving into lap eight, Lawson continued on his charge, getting within DRS range on Daruvala.

Enzo Fittipaldi brought out the safety car after a collision with Roberto Mehri. Amaury Cordeel is forced to retire after clipping Fittipaldi in the aftermath.

As lap 12 ended, the safety car peeled into the pits, Daruvala controlling the restart well and maintaining position. Behind Drugovich was quickly catching championship rival Pourchaire looking to make a move.

Despite not starting the session, Verschoor manages to get back out on the track; however, he sits five laps behind the rest of the field.

Moving into lap 16, Lawson makes the move on Daruvala for P1 as Armstrong eyes up a similar move.

As the top five battle for position, Lawson extends his lead up front to just over a second. In the mid-field, Ayumu Iwasa passes yesterday’s pole sitter Logan Sargeant to claim P9.

After a risky move from Armstrong on Daruvala, Daruvala leaves the track, however, rejoins in P2. This left him vulnerable to attacks from Pourchaire as the pair went wide once again. Pourchaire claims P3, while Armstrong falls down the order to P5.

This then opened the door for Drugovich, who continued to battle with Pourchaire for P3.

Armstrong’s day gets worse as he is pushed off the track by teammate Juri Vips, allowing Frederik Vesti to also take advantage and gain position.

At the front of the field, Lawson crossed the line to take the win; Daruvala behind him. Pourchaire kept hold of the final podium position at his home race as he managed to hold off Drugovich.