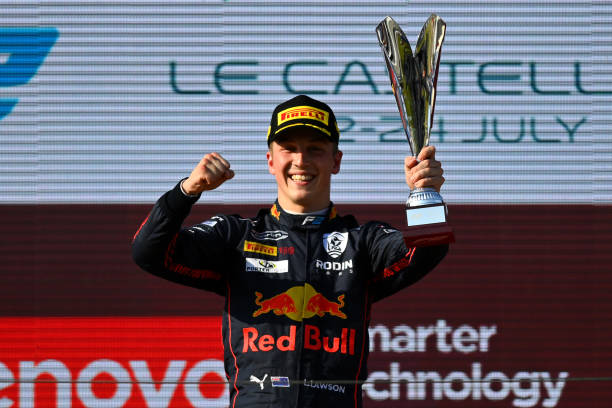 LE CASTELLET, FRANCE - JULY 23: Race winner Liam Lawson of New Zealand and Carlin (5) celebrates on the podium during the Round 9:Le Castellet Sprint race of the Formula 2 Championship at Circuit Paul Ricard on July 23, 2022 in Le Castellet, France. (Photo by Dan Mullan/Getty Images)

F2 Lawson: “All to play for” in Le Castellet Feature Race

Liam Lawson spoke to FormulaNerds after his Paul Ricard victory

Carlin’s Liam Lawson took the victory in today’s Sprint Race at Paul Ricard and said it’s “all to play for” in the Feature Race tomorrow.

Formula 2 took to the track this evening in Le Castellet for the first Sprint Race at Paul Ricard since 2019. With the reverse grid, it was Prema’s Jehan Daruvala on pole with Liam Lawson also on the front row.

Unfortunately for the Kiwi driver, he again suffered a “frustrating” start, which is something he’s struggled with a lot this season. However, that didn’t hinder him from turning the race around and taking the victory.

When speaking to Formula 2 after the race, Lawson said that he “felt equal with the guys in front” straightaway. This enabled him to “attack Marcus [Armstrong] quite early on.” But the Carlin driver did admit that the move on Armstrong “was half accidental”. He elaborated saying that he was trying to avoid the Hitech car which in turn meant he overtook him “at the same time.”

Heading into the weekend, Lawson had said that with the lateness of the Sprint Race, the “darkest visors” will be needed. He said that the “glare” of the sun could be an issue because it could affect the difficulty of seeing the apexes of corners.

Lawson’s expectations of the Feature Race

When asked by FormulaNerds about this after the race, Lawson said he actually “didn’t notice it so much.” He continued saying that “today was sort of in a good window”, and the tyres were also “in a good window” as well, especially “towards the end of the race.”

However, he noted that “tomorrow is going to be a lot earlier” and also a “lot hotter”. Lawson admitted that whilst the tyre degradation wasn’t a big issue today, he feels it could “potentially” be bad tomorrow.

Over the past two days with Qualifying and the Sprint Race, Lawson “ran both” the soft-compound and hard-compound tyres. He said to FormulaNerds that during the Feature Race, especially “with pitstops” and pitstop strategy coming into play, it will be “all to play for”.

The starting grid tomorrow sees Lawson starting ninth, ahead of Jehan Daruvala, but behind Marcus Armstrong. In recent Feature Races, the Red Bull Junior hasn’t had much luck.

Whilst he scored a P3 podium finish in Silverstone, he retired from the Monaco Feature Race and continued his lack of points into Baku, where he was classified as finishing P15. Austria saw him score only one point, after finishing 10th.

With the potential of the Carlin car, which Lawson has said has “always been there,”  we could see a good Feature Race result for both Carlin drivers.