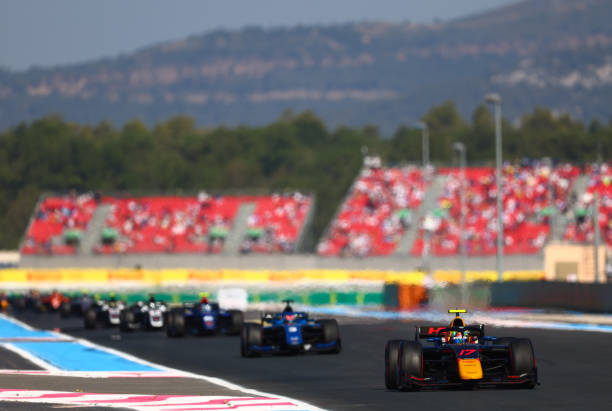 Polesitter Logan Sargeant fell back at the start, allowing Ayumu Iwasa to slip ahead of him. But it was Jack Doohan in fourth place who had the best start, coming through to take the lead at the start of the race.

Iwasa reclaimed the lead from Doohan later on in the lap, as further back in the field Marino Sato had an engine issue and stopped on track.

Then it was Marcus Armstrong and Dennis Hauger who made contact, which ended up with Armstrong out of the race after an unlucky weekend for the Kiwi. The safety car was brought out to recover both Sato and Armstrong, while Hauger pit to change his damaged front wing.

As the safety car ended on Lap 5, Iwasa pulled off a perfect restart, making a gap to Doohan in second right away. He then continued to pull away from the rest of the pack, setting the fastest lap so far on Lap 7.

On Lap 8 Clement Novalak became the first driver to complete a scheduled pit stop, and he was quickly followed by the rest of the drivers. Meanwhile, both Frederick Vesti and Theo Pourchaire were rapidly closing in on Sargeant in third place.

drama in the pits

Pourchaire was the first of the frontrunners to pit, and he was followed two laps later by Sargeant. But the polesitter suffered a mechanical issue during his pit stop, and was unable to keep the car going. He fell back and became the fourth retirement from the race.

Doohan then pit the following lap, but was overtaken by Pourchaire on warmer tyres. The race leader Iwasa came into the pits on Lap 15, and dropped down to fourth place. Liam Lawson inherited the lead, but he himself made his pit stop not long after.

When the leaders got back out in front again, Doohan closed in on Pourchaire and was ready to take second place back. But the Australian driver made a mistake, which ended with him spinning and making contact with Pourchaire. Doohan dropped to fourth place while the French driver held P2.

Jehan Darvuala, running in the top ten, stole the fastest lap. But not for long, as the championship leader Felipe Drugovich came charging through the field in the final stint of the race.

Drugovich closed up on Doohan in fourth, while further back Richard Verschoor took eighth place from Roy Nissany after a mistake from the latter.

With three laps to go Drugovich secured fourth place. During the closing stages of the race Hauger set the fastest lap of the race, but the championship leader took it back again on the penultimate lap. Verschoor, running eighth, suffered a mechanical issue and pulled to the side of the road at the beginning of the final lap.

Throughout all the drama, Iwasa pulled an 8.6 second gap to Pourchaire, and crossed the line first to take his maiden win in Formula 2. Pourchaire and Vesti in the ART cars completed the podium.

There is no time to rest for the Formula 2 drivers, who will head to Hungary for another round this time next week.