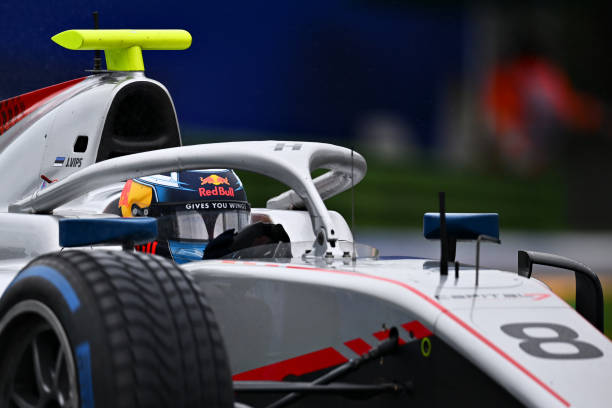 IMOLA, ITALY - APRIL 22: Juri Vips of Estonia and Hitech Grand Prix (8) drives on track during practice ahead of Round 3:Imola of the Formula 2 Championship at Autodromo Enzo e Dino Ferrari on April 22, 2022 in Imola, Italy. (Photo by Clive Mason/Getty Images)

As the challenging conditions continued and temperatures dropped, the F2 racers headed out on track, led by Ralph Boschung.

As drivers continued to go for push laps, the ART GP car of Frederik Vesti sat alone in the pits.

The surprisingly calm start of the session did not last long.

Narrowly missing the barrier, Campos Racing’s Olli Caldwell joined the long list of drivers to spin off the track today.

The red flag was rapidly brought out, sending all cars back to the pits. It was believed that this would give Vesti a chance, who had still not set a time.

Momentary panic set in as Juri Vips exceeded the limit and found himself in the gravel, before almost immediately spinning.

The gravel seemed more popular than the track at times, with Marino Sato also taking a brief trip over the white lines.

Half the session to go

With only one red flag in the first 15 minutes, F2 was already producing a more successful qualifying than the chaotic F1 session.

However, it was clear that curating a solid lap was becoming more and more difficult. The danger of the sun setting was getting ever-closer, making it harder for drivers to master their braking points.

The top three were separated by less than a hundredth of a second as fan-favourite Vips led the pack with a time of 1:41.599. Jake Hughes followed close behind, just ahead of Liam Lawson in third.

Unusually, Fittipaldi was shown the black and orange flag. This was a warning as his car’s rain light was not on, which was a potential danger for other drivers.

Aside from this mistake, avoiding traffic seemed to be the most significant problem in the closing minutes.

After dropping down the order, Boschung once again leapt to the top of the standings before being displaced once again by Vips. The Red Bull junior beat Boschung by almost half a second, setting a time of 1:40.221.

A mighty lap from Jack Doohan saw him briefly take second place, but rookie Ayumu Iwasa quickly beat him to the front row.

There were last-minute attempts to improve from a multitude of drivers, but little changed in the final minute.

Vips takes two points and will start first on Sunday’s feature race, with Iwasa and Doohan completing the top three.

As always, tomorrow’s sprint will see the top 10 reversed, giving Logan Sargeant a chance to earn some points.